Technology transfer and process optimization for a ibuprofen based formulation

In the pharmaceutical industry’s competitive and ever-changing business climate, companies are frequently divesting certain assets and acquiring others. As a result, the industry is often very busy with manufacturing site changes and drug product technology transfers. [1] According to ICH10, guideline for pharmaceutical quality system “The goal of technology transfer activities is to transfer product and process knowledge between development and manufacturing, and within or between manufacturing sites to achieve product realization. This knowledge forms the basis for the manufacturing process, control strategy, process validation approach and ongoing continual improvement.”
It is necessary to start from a definition: Receiving Unit (RU) is the involved disciplines at an organization where a designated product, process or method is expected to be transferred, whereas the Sending Unit (SU) represents the involved disciplines at an organization from where a designated product, process or method is expected to be transferred.
During the transfer process, the RU should identify any differences in facilities, systems and capabilities and communicate with the SU about these differences to understand the potential impact on ability to run the process to deliver good product quality. Differences should be understood and satisfactorily addressed to assure equivalent product quality. Based on the information received from the SU, the RU should consider its own capability to manufacture and pack the product to the required standards and should develop relevant plant operating procedures and documentation before the start of production.
Buying a new machine involves major  change control as well as technology  transfer activities if the production is  actually ongoing at Customer’s site. Verifying the impact on the ability to run the process is synonymous of performance qualification. It represents a documented verification that the equipment or system operates consistently and gives reproducibility within defined specifications and parameters for prolonged periods. The process validation, necessary in this case, actually provides a high degree of assurance that a specific process will consistently result in a product that meets its predetermined specifications and quality characteristics. [2]
Aim of this study is the technology transfer and process optimization in the context of a cooperation between IMA (Italy) and Laphal Industries (France): in particular, Laphal bought a middle-size industrial tablet press from IMA as reported in the interview. [3] In the first part of the study, placebo from Customer was tested to explore the reliability and flexibility of IMA machine as well as to find best process parameters according to Laphal’s needs. Parameters found was secondly reproduced and adapted with the real formulation ibuprofen based to confirm the equivalency in terms of product quality.

To analyze the reliability and capacities of the machine, a placebo formulation, containing lactose, cellulose and magnesium stearate, was used.  The trials were conducted using middle size equipment, Prexima 300 (IMA, Italy) hosting 33 stations Euro-B turret and round-shaped bi-convex punches (diameter 8 mm).
In order to qualify the equipment, different tests were performed to study:

2. Influence of feeder speed: according to the results obtained for test 1, different paddle speed were performed (12, 30, 50, 70, 90, 120 and 140 rpm). To estimate the best choice, Relative Standard Deviation (RSD%) even on weight than on hardness was considered: the lower the better.

3. Influence of compression force (CF): maintaining PCF half of CF studied, trials were executed at same tablet press speed. At the end, tablet strength and its RSD (%) were the results considered.

Tests performed can be summarized in the following diagram: 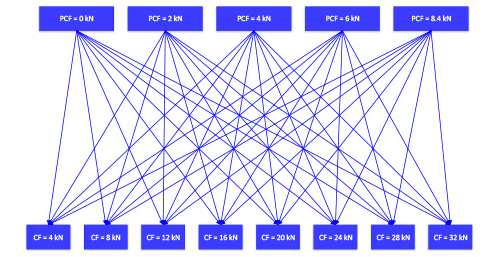 Once again, tablet strength and its Relative Standard Deviation were taken in consideration to find best process parameters.

5. Hysteresis study: study focused on weight hysteresis (%) when tablet press parameters were changed according to test 4 (PCF and CF). First, average weight of 20 tablets was evaluated. Secondly, at a fixed compression force and tablet press speed, weight variation was analyzed summing 20 tablets when changing PCF (0, 2, 4, 6, 8.4 kN). Acceptable hysteresis limit were among 1.4% and 1.9%.

Once defined the best conditions, machine yield and continuous production of 200 kg were executed. Starting from the knowledge acquired with placebo formulation, real Customer’s ibuprofen blend was tested in Prexima.

Tablets were always produced according to target expected on weight, thickness and hardness: machine performance convinced Customer to buy the machine for his purposes.

1. Influence of pre-compression force
Maintaining same weight, tablet strength and its RSD (%) can be summarized in an all-in graph (Figure 2, Figure 3).

2. Influence of feeder speed
Maintaining same weight, thickness and hardness, paddle speed was changed to find the highest stability as possible: this reliability was analyzed monitoring RSD (%) even on weight than on hardness (Figure 4, Figure 5).
Highest stability was reached with 30 rpm as paddle speed, paddle shape was flat and standard because any particular design was required with the blend analyzed. [4]

In conclusion, best parameters are obtained at 93 rpm (182,160 tph) without particular influence of pre-compression force even if this is a critical tableting process parameters as reported in the previous article. [5]

4. Influence on strength with different pre-compression and compression forces
At same tablet press speed, paddle speed and tablet weight, tablet strength and RSD were analyzed and summarized in the following graphs (Figure 8, Figure 9).

According to these values, weight average is 223.02 mg and hysteresis of 1.4% corresponds to 219.9 mg and 226.14 mg. If these limits are reported in a graph, weight is in compliance with hysteresis requested (Figure 10).

The average calculated on each tests and on 20 tablets is 4,446.76 mg and with an hysteresis of 1.4%, limits acceptable are between 4,509 mg and 4,384.5 mg: all values are within limit and real hysteresis is 0.3%.
Performance test was executed to verify capability of machine to avoid spare of product and yield: machine performed at 92 rpm (182,160 tph), 6 kN as PC and 21.5 kN as CF. 10.3 kg of powder were loaded to run for 15 minutes continuously: after 14’54’’, machine stops and tablets unloaded were 10.127 kg of good and 0.00739 kg of rejected (total: 10.2 kg). Performance of machine was 99% meaning that almost all the powder loaded is compressed without significant losses.
The above performance was achieved without a significant temperature increase of die plate. Thanks to the new-generation gearboxes implemented on Prexima, the temperature of die plate was always <32°C without needing to apply the specific and/or complex cooling systems which Laphal is used to apply on other presses.
Once explored tableting process, production of 200 kg were performed at 76 rpm as turret speed.
Same tablet press speed as well as paddle speed was transferred for real ibuprofen production (Table 3). Because of inner differences between placebo and real API based formulation, PCF and CF were adapted.

Aim was achieved: preliminary trials with placebo allows Customer to understand reliability and flexibility of Prexima 300.
Secondly, process parameters were transferred successfully in a real production confirming Customer’s expectations and achieving the same level of quality obtained with placebo formulation.
The temperature of die plate was also confirmed to be <32°C over the long-run production with ibuprofen. Thanks to the cooperation between IMA and Laphal Industries, the technology transfer was fast and without any inconvenience. 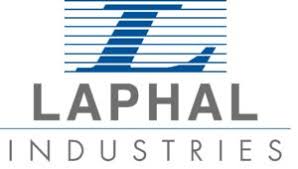