Feed frame optimization of a MUPS blend in a rotary tablet press.

The oral route of drug administration is the most convenient for patients [1] and include single-unit dosage form (SUDF) and multiple-unit dosage form (MUDF) [2]. SUDF are characterized by a single core, which may comprise a neutral core coated with layer containing the active ingredient, or an active core in which the API is mixed with other excipients [3].
MUDF consist in small particles which are contained generally in a capsule or a tablet; their most important characteristic is that, being small particles, can more evenly distribute in gastrointestinal tract [4,5] having less variance in transit time through gastrointestinal tract compared to SUDF. Multi-unit forms, indeed, offer more predictable gastric emptying, which is less dependent on the state of nutrition, a high degree of dispersion in the digestive tract, less absorption variability, and a less risk of dose dumping. As consequence, high-local drug concentration is generally avoided and local irritation as well. Nevertheless, patient compliance is improved because of ease of swallowing and flexible dose fractionation delivering incompatible drugs or excipient thanks to differences in coating application [2].
Moreover, MUDF represent an innovative way to introduce drugs with different release profile answering the need of a multi-target approach in treating different diseases. Last but not least, converting a single unit dosage form in MUDF extend the commercial values of a given drug.
Multi-unit pellet system (MUPS) is one of the most popular multi-unit dosage forms that are generally filled into a capsule or compressed with other excipients to form a tablet [6,7]; MUPS tablet (TMUPS) in particular are composed of pellet, uncoated or coated, with a powder phase and excipient necessary to obtain a final and compact tablet.
The drug may be included in the core of pellet itself (polymeric matrix) or layered on it with suitable excipients for modified release purposes (delayed or sustained). The delayed release is generally achieved using polymers such as methacrylic acid copolymers or HPMC based. Sustained release is obtained through the using of dedicated polymer (e.g. etilcellulose, Surelease®, Colorcon) with different film thicknesses or providing uncoated pellet that act as matrix polymeric system (e.g. hydrophilic cellulosic matrix). The powder phase contains generally fillers, binders, disintegrant and lubricant.
Innovation on one hand but manufacturing challenging on other: potential polymer-damaging and blend segregation are the most well-known issues. For this reason, only few commercial pharmaceutical TMUPS are available on the market (Table 1).

Ideally, TMUPS should disintegrate rapidly in the gastrointestinal tract guaranteeing same drug release of an uncompressed MUPS powder: compression-induced damages to functional polymer could lead to undesired drug-release with adverse effect and to esthetic-polymer could alter the taste-masking purpose as well. Polymeric coating, indeed, must be protected from cracking when a certain a compaction pressure is applied [2].
Concerning segregation tendency, it is necessary to specify that, generally, pellet of MUPS formulation have a particle size distribution included in the 300-2,000 μm and they are present in a percentage of 20-70%, whereas other excipient have a distributional array smaller than 200 μm. As result, high differences in particles dimension occur in potential physical separation during the handling of the blend prior and during tableting. If segregation occur, tablet could be produced without the quality required in terms of API homogeneity causing the rejection during quality control. Working on feeding system is mandatory for manufacturer supplier to ensure the respect of blend homogeneity and avoid out-of-specification conditions.
Aim of this case study is the feed frame optimization for a MUPS formulation in order to verify process feasibility on a rotary tablet press model Prexima 300 (IMA, Italy). 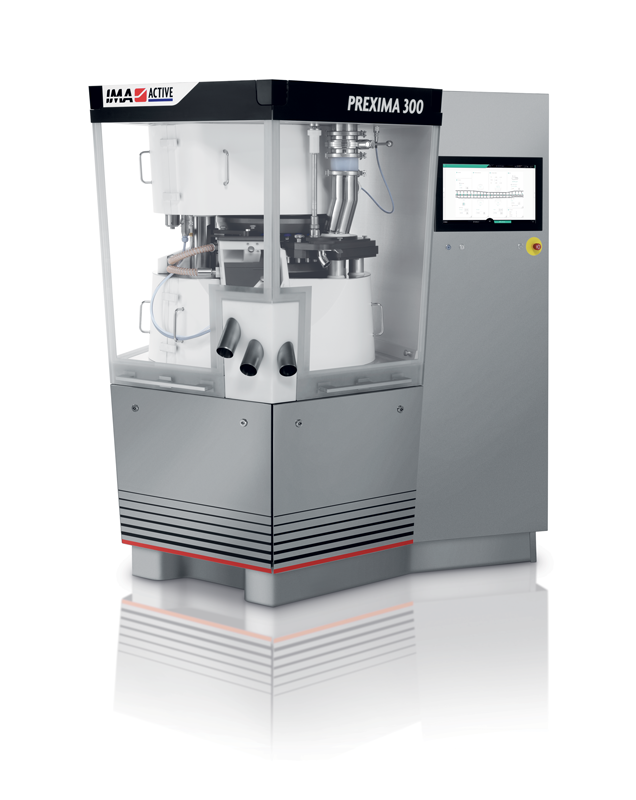 A MUPS placebo formulation based on a customer already-existing on the market formulation was taken as reference. It was composed by pellet of 400 μm as average dimension and other excipient necessary for compression (Table 2).

Pellets, kindly supplied by Colorcon UK (Suglets®), were coated with etilcellulose based polymer (Surelease®, Colorcon) with the addition of blue colorant (FD&C®, Colorcon) to simplify the identification of the pellet homogeneity inside the tablet. Pellet coating was performed in bottom-spray configuration fluid bed equipment (Aria 120, IMA). Final coated pellets were mixed with MCC and magnesium stearate in a tumbler blender with a 25 L bin (Cyclops, IMA) confirming the mixing end-point through NIR spectroscopy application [8,9]. The NIR Instrument used is the MicroNIR PAT-W from VIAVI which is equipped with a 128-pixel InGaAs photodiode array with a wavelength range of: 900 – 1,700 nm (11,111 – 5,882 cm–1).

Subsequently the MUPS blend was loaded in a rotary tablet press (Prexima 300) fastening the bin of the tumbler blender directly onto tablet press hopper ensuring, at the same time, as less as possible vibration that can occur segregation in case of MUPS blend.
Prexima 300 was equipped with a Euro-D turret hosting 27 stations and flat-faced round punches of 13 mm as dimension. Punches have even key than logos both on upper and lower punch to identify the orientation compared to turret movement (Figure 1). 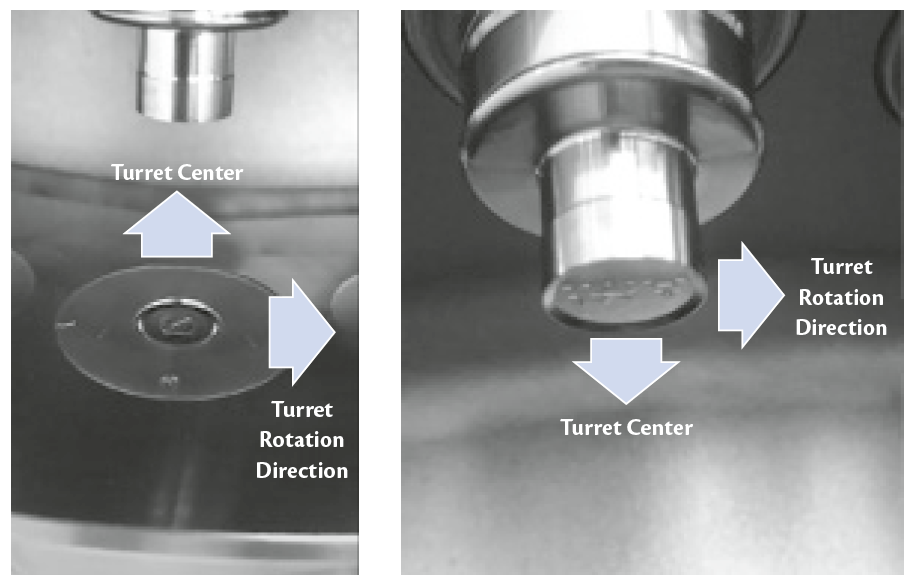 Analytically, a specific method was developed to count the percentage of pellet inside each tablet and their concentration deviation. Through Design Expert Software, results were analyzed by using ANOVA method analyzing the significant portion of variance and so to determine. After checking that the model is significant , the different geometric variables (firstly feeder type and then paddle profile) were compared focusing on the interaction existing for each design point for the same process variables (turret and paddle speed).
To evaluate process reliability and to enforce results obtained with analytical method, samples were analyzed also from a visual point of view. Pellet distribution on each tablet face was the focus: the presences of logos (Figure 2) allowed to characterize if in a specific face or tablet quarter there was some pellet agglomeration that are not desired for a correct distribution. 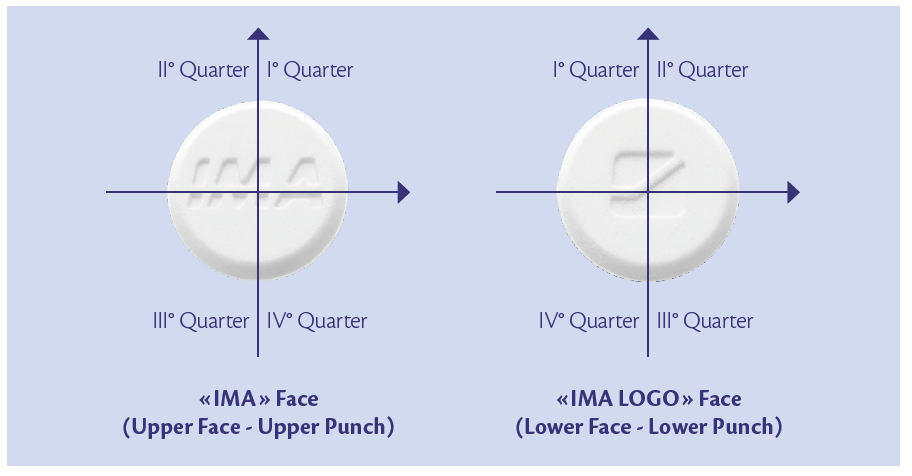 Tablets were produced on Prexima 300 with the aim of reaching always 500 mg as tablet weight and 8 kN as main compression force (optimized force to avoid pellet coating breaking). Pre-compression chamber, upper punch penetration and loading cam were kept as constant.

Final mixture was obtained thanks to smooth and reproducible granulation and mixing step: blending end point was evaluated through MicroNir ProTM 3.0 software by VIAVI. The raw spectra were pretreated firstly using 1st Savitzky-Golay Derivative (5 points) and then Standard Normal Variate on the entire spectral range. Using Moving Block Standard Deviation (Block size: 30), an example of the behavior of the mixing stage (Figure 3) is reported.

Analyzing the Figure 3 is straight forward deducing that the homogeneity (minimization under acceptable level the Standard Deviation) is reached both immediately before the addition of the lubricant and in the end of the overall mixing stage. Tableting was possible with all the mechanical configuration applied and weight stability was reached without any issue.
Results obtained were a mixture between analytical and visual results: starting with analytical results, it was evaluated the discrepancy in terms of pellet concentration expected (43%) vs founded and Relative Standard Deviation in pellet concentration when analyzing tablets within the same test (Figure 4 and 5). 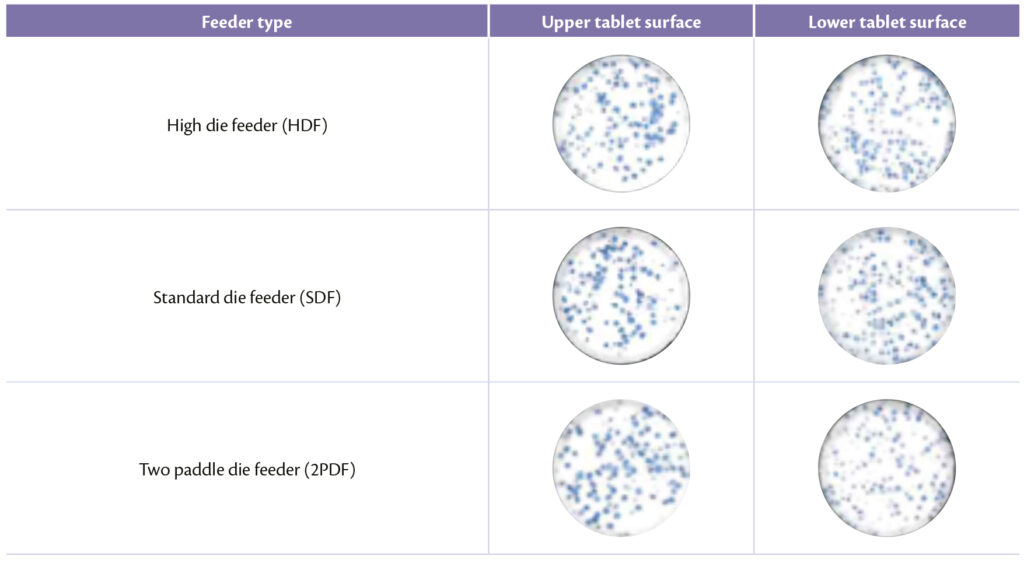 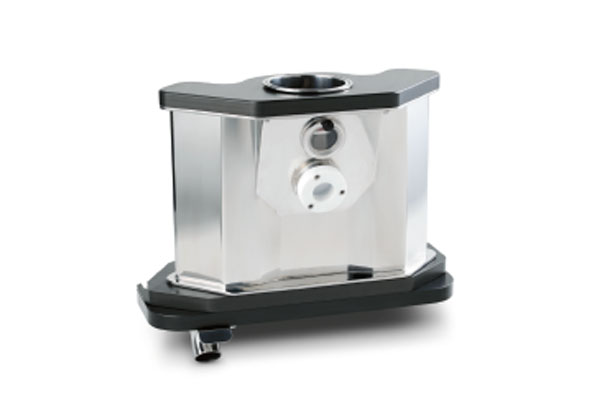 The high volume of HDF that can be filled with powder offer to the particles the possibility to be forced less by mechanical parts that can induce segregation.

Same approach for paddles shape, whose design can clearly influence the sort of the process as explained previously [10]. The optimal balance between analytical and visual results were obtained with flat profile that seems to avoid better segregation than round profile: flat and flat slanted indeed allow to produce tablets with an acceptable pellet distribution as shown in Table 5 (Figure 6).

Single paddle speed has an important influence on results obtained: the position inside die feeder differences the functionality of each paddle. Paddle on the left, called loading paddle, is more responsible of loading inside dies whereas the one on the right, called dosing paddle, tends to complete the die filling and scrapes the excess of powder dosed. More in detail, setting loading paddle speed almost twice of the turret speed allows to move the MUPS blend keeping the homogeneity of the blend over the time. The speed of the dosing paddle is related to the back-dosing of blend inside the feeder: when passing below the feeding system, initially the lower punch is completely down to fill the dies than it goes up to fine-tuning the dosage required to obtain the tablet weight. In this precise moment, the dosing paddle scrapes the powder in excess back-dosing it inside the feeder: for this reason, considering the presence of particles with different density and particle size, choosing a low speed prevents undesired scraping phenomenon that concurs in segregation.
As predictable, high output in terms of tablet press speed negatively affects the segregation: centrifugal force-phenomena could appear and concur in generating segregation inside dies.

MUPS blend represents a high interest even from machine supplier that pharmaceutical company point of view even If a small number of TMUPS is already present on the market.
The main reason is the high grade of challenging from the formulation stage (e.g. pellet core, polymeric coating, cushioning excipients) to manufacturing-ability (e.g. feeding, balance between compression force used and pellet integrity and segregation). Avoiding segregation is mandatory for TMUPS manufacturing: correct handling in pre-tableting processes with correct choice in terms of feeding demonstrate the possibility to obtain TMUPS.
High die feeder with flat-profiled paddles offers a prompt solution because powder is moved gently without affecting the whole homogeneity of the powder.
In order to satisfy TMUPS manufacturing requirement, other measures should put in practice: low compression force has to be chosen to guarantee the integrity of functional pellet coating and loading cam has to be near in terms of millimeter to the dosing chamber chosen.