How to enhance tableting production with a paracetamol based formulation.

Acetaminophen, commonly known as paracetamol, has analgesic and antipyretic properties and weak anti-inflammatory activity.
It is used in the symptomatic management of moderate pain and fever: in adults, 500 mg are recommended in case of fever and 1 gr for moderate pain.
When taken at recommended doses it has an excellent safety profile, notably lacking the gastrointestinal side effects of aspirin and ibuprofen: for this reason this molecule also well known as paracetamol is widely used also in pediatric and geriatric field.
However, acute overdosage with acetaminophen, whether accidental or deliberate, is relatively common and can be extremely serious: ingestion of 10–15 gr of acetaminophen by adults may cause severe hepatocellular necrosis and doses of 20–25 gr are potentially fatal [1].
The excellent tolerability of therapeutic doses of paracetamol is a major factor in the very wide use of the drug: solid oral dose including tablets, capsules, granules as well as syrup and suppositories manufacturing is of big interest in pharmaceutical field [2].
Recognized as the most stable and economic pharmaceutical forms, tablets are produced in general as instant release (IR) formulation with 500 or 1000 mg as API content.
This article has the aim to enhance production in tableting in order to answer the large  demand in the market. 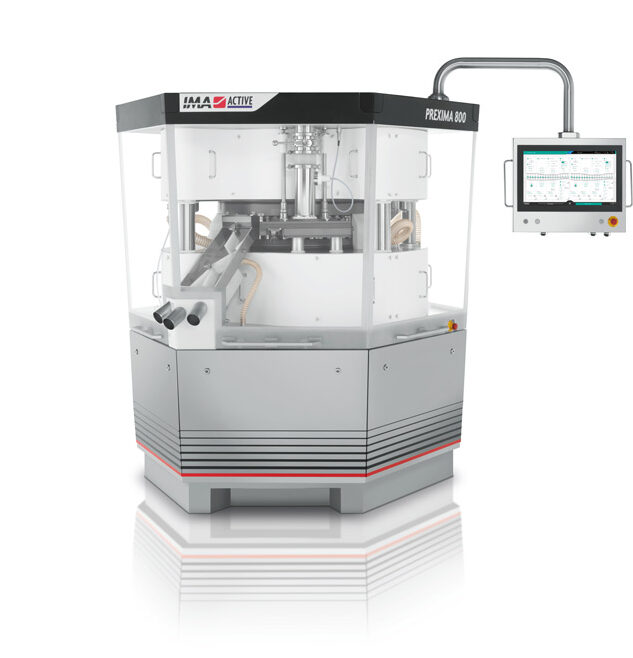 A formulation paracetamol based is used for process optimization: it contains 90% as API occurring a medium tendency of electrostaticity, adhesivity and coesivity intra-particles.
Large-scale industrial double side rotary tablet press (Prexima 800, IMA Italy) is used as equipment to enhance production.

It was equipped with Euro-D turret hosting 53 stations and biconvex oblong Euro-D punches. Blend was sieved through 1.2 mm sieve to homogenize the particle distribution and increase the flowability of the powder.
A pneumatic loading system was selected to feed continuously the die feeder, that was mounting flat shaped paddles. Production was increasing step by step: three different tests were performed (test 1, test 2 and test 3) respectively at 318,000 tablet per hour (tph), 381,600 tph and 508,800 tph (Table 1).

At the end, tablets were checked from a technological point of view to confirm the compliance with quality required by customers: the analysis was focused on weight and hardness variation comparing all the trials each other.

Correct up-stream processes allow a smooth tableting process: tablets produced fit always quality required by the Pharmacopeia thanks to the combination of good sieving and mechanical choices on tablet press itself.
Attention was deeply focused on weight variation and its Relative Standard Deviation over the time: good and reproducible results were achieved for both equipment sides and at all the tablet press speed explored (Figure 1). 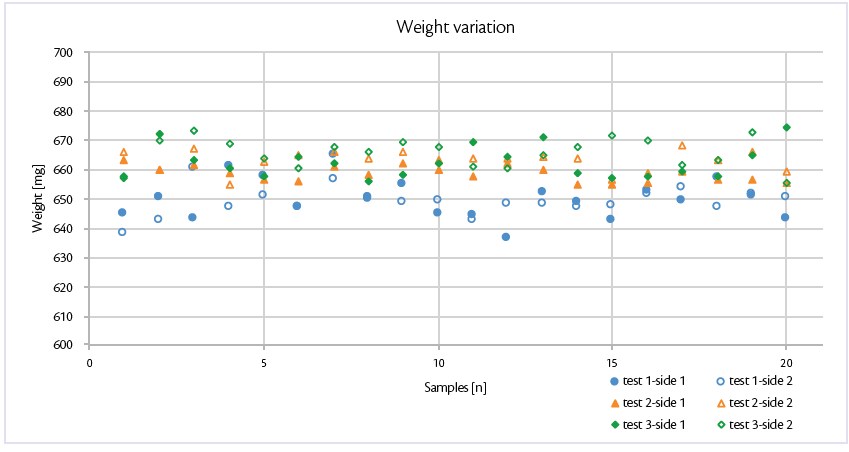 This all-in graph evidences both sides of Prexima 800 for each test: comparing the two sides, the trend is always comparable and Relative Standard Deviation is less than 1%, confirming process stability independently of tablet press speed chosen.
To confirm and strengthen the results, also tablet strength was monitored: robust structure of Prexima 800 allows to maintain it stable independently of peripheral speed performed  (Figure 2). 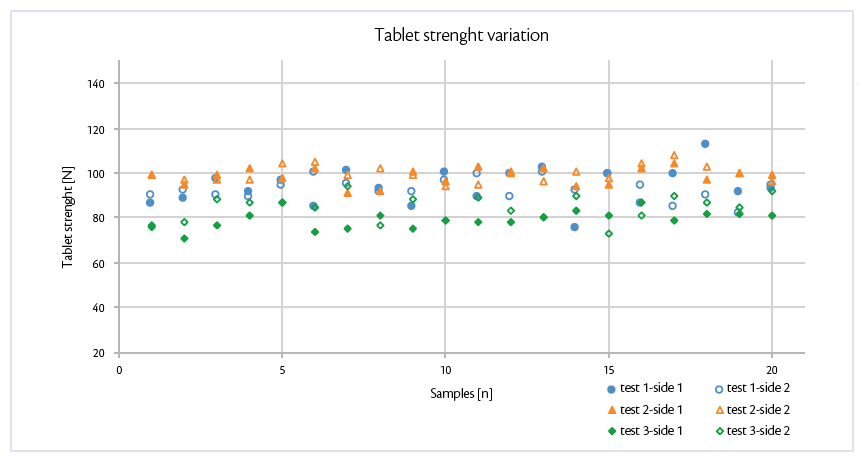 As before, same approach was pursuit to evaluate tensile strength: this all-in graph evidences both sides of Prexima 800 for each tests.
As before, tablet hardness is reproducible and comparable monitoring the two sides of the same tests.
Evaluating the increasing of tablet press speed, tablet strength slightly decreases showing stability and robustness of the process performed.

Paracetamol blend can be tableted smoothly in Prexima 800 hitting all the target requests by Customers. High-dosed API often shows unstable process due to bridges and lumps tendency occurring decreasing of production. Exploring the process allows to understand that, introducing sieving before tableting, improves the whole homogeneity of the blend introduced in the tablet press.
Thanks to the combination of mechanical and technological choices as feeding system, paddle shape and upper punch-penetrations, production’s quality is reproducible also at enhanced such as 508,800 tph. Robustness of process brings to tablets’ technological characteristics stable over the time: Relative Standard Deviation (RSD) on weight is under 1% in all trials. Tablets strength confirms this theory and doesn’t evidence any significant impact also at high speed and low dwell time.