External lubrication application on a double-side rotary tablet press: how to set up the equipment and minimise time losses.

Tablet dosage forms have been the first choice in the development of new chemical species, and account for some 70% to 80% of all pharmaceutical preparations. [1] Several advantages can be considered: ease of assumption, high compliance, product stability, easy transportation and dosing accuracy are just some examples.
In the industrial field, the increased use of high-speed tablet press machines is strictly connected to formulation. optimisation: it is well known [2, 3] that lubricants are often required within a blend to be compressed, and that they are expected to help speed up the manufacturing processes.
Lubricants reduce die wall friction during tableting and facilitate tablet ejection, giving a smooth and lucent surface to tablets themselves. Their function is the ability to form an absorbed film around host particles during mixing, thus decreasing solid-to-solid contact. This includes the bond between the particles of the excipients or API present within the formulation, thus acting as physical barrier between tablet and die wall, reducing die wall friction.
As a consequence, the addition of a lubricant causes a decrease in tensile strength, especially when a larger quantity is added or mixed for a long time (overlubrication). Furthermore, lubricants are generally lipophilic substances (magnesium stearate is the most used), which contribute towards slowing down tablet dissolution time in water, leaving spots or residues that are not well accepted in effervescent application.
There is clearly a need to accurately balance the level of lubricant added to contrast stickiness in punches and dies, without affecting tablet strength, compaction and dissolution: one possible approach is external lubrication.
External lubrication consists in spraying and continuously aspirating lubricant directly onto punch surfaces and dies.
The precise quantity of lubricant is provided from a pre-calibrated screw. The advantages are related to the low quantity provided and already demonstrated [5] which enhances tablet tensile strength. The purpose of this study is to show how to set up external lubrication equipment by analysing the process parameters’ importance and impact on production using a double-side rotary tablet press.

As a model blend, an un-lubricated placebo suitable for direct compression (Ludipress, BASF, Germany) was used. Magnesium Stearate (MgSt) as a lubricant was provided by an external lubrication system (LUMS, IMA, Italy) that sprayed simultaneously on both machine sides. The specific functionality of the equipment has been well described previously. [6] The tablet press used was a double-side type (Prexima 800, IMA, Italy) equipped with a Euro-D turret, hosting 53 stations with Euro-D bevelled-edge round tablet of Ø 13 mm diameter.
To show how to set up LUMS on a double-side rotary tablet press, firstly the quantity of lubricant provided by the screw to both machine sides has to be calculated to verify that both the first as well as the second tablet press side receive the same amount of lubricant (calibration phase).
The calibration of the screw is obtained by measuring the quantity of lubricant provided at 6 different screw speeds (50, 60, 70, 80, 90 and 100 rpm), repeating the action three times. A line is then obtained for both sides that allows the amount of magnesium stearate sprayed over a given time to be predicted.
Secondly, a DoE approach was followed to find an equation that describes all the most critical process parameters on LUMS and their impact on the tablet press. For every screw diameter selected a full factorial DoE approach was established, varying the 3 main process variables (tablet press turret speed, screw speed and pressure air of LUMS line) in two levels, as summarised in Table 1. In addition to the 8 edge experimental points (23), another central point is added to the cube to strengthen the reliability of the results (Figure 1). 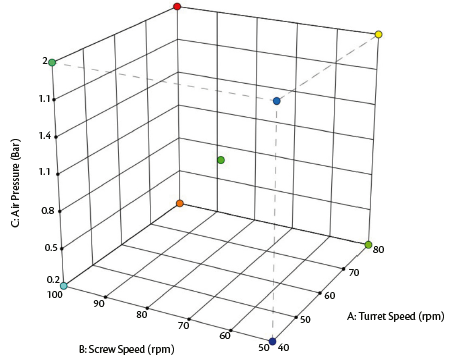 The responses taken in account to evaluate the impact of LUMS process parameters on the tableting process are pre-compression force and its relative standard deviation (RSD), main compression force and its RSD, ejection force, tablet quality (smooth or rough surface or dusty tendency), and quantity of magnesium stearate found in the tablets.
For each test, tablet weight and thickness were kept constant so as to have reliable results; as a consequence, the average compression force was kept the same over time by adjusting the tableting process parameters (dosage chamber and paddle speed).

The results will be presented starting with LUMS Flow Calibration and then analysing the effects of each process variable one by the one. The different variables will be evaluated considering the analysis to quantify the concentration of the magnesium stearate on each tablet. Firstly, it is necessary to ensure that volumetric feeding is accurate and consistent along the screw speed range (Figure 2).

Moreover, Prexima 800, as already mentioned, has two different feeders at the opposite part of the turret: to feed both sides with only one LUMS machine, the mass flow in each branch needs to be the same. In other words, by dividing the mass dispensed from Side 1 and Side 2, it is possible to build the plot above which shows that on average the ratio calculated for each screw speed is close to 1, confirming that the mass flow rate is the same for each side (Figure 3).

Figure 3: Ratio between MgSt mass of side 1 and 2 at different screw speed.

Having discussed LUMS calibration, a premise is necessary: each lubricant has its own way of being dusted around the tablet press, basically due to physical and technological characteristics. Particle size distribution, bulk and tapped density as well as water content will strongly affect this behaviour, which means process parameters must be fine-tuned. Since magnesium stearate is the most commonly used lubricant, this study has focused on this specific excipient.

Considering air pressure as the first variable, mass concentration slightly increases together with the air pressure (Figure 4) on the other side, and the dirtiness inside the process chamber increases drastically due to the higher kinetic energy of the particles at 2 barg rather than 0.2 barg, allowing the particles to avoid the vacuum cleaner.

The mass flow rate increases proportionally with screw speed and screw diameter. This effect is directly visible by analysing the concentration of the lubricant inside the tablet.
In this case, combination with the turret speed process variable is fundamental (Figure 5).

Considering different screw speeds at low tablet output (40 rpm turret press speed), the MgSt concentration goes from 0.03% at 50 rpm up to 0.07% at 100 rpm for the 10 mm screw, whereas with the 8 mm screw the concentration goes from 0.02% at 50 rpm up to 0.06% at 100 rpm. By increasing the tablet production rate (80 rpm tablet press speed), the level of MgSt tends to be less affected by screw speed variation. This effect can be explained both by the higher lubricant flow requested by the tablet for the process and the lower residence time that the dies spend under the lubricant injection.
After these considerations, screw diameter selection needs to be done before screw speed, a variable that may be optimised during the process.

Two levels of turret speed were investigated: 40 and 80 rpm, which translated into output correspond to 245,400 and 508,800 tab/h respectively.
In general, by increasing turret speed, the level of lubricant decreased (Figure 6).

Observing also the analytical results, by going from a turret speed of 40 rpm to 80 rpm, the concentration of the MgSt decreases on average by:

The other responses do not appear to be sufficiently responsive to foresee the tablet defects or the under-lubrication effects.

The case of the ejection force case is fundamental to explain the previous concepts: its force clearly increases (Figure 7), decreasing the lubricant screw speed and increasing the turret velocity, but there is no underlying step change meaning that the friction force in the dye wall becomes so high that damage occurs to the side of the tablet.
With all the previous considerations, a mathematical model has been calculated and optimized to include all the most critical process parameters. Equation 1 shows the main proportionality that provides evaluation of the best screw speed and geometry to use.

• N is the number of tablet press sides.
• mcp is target tablet weight.
• %MgStcp is the mass concentration of the magnesium stearate theoretically present inside each tablet to avoid any tablet defects.
• nm number of dies of the tablet press turret.
• ωr turret speed.
• fp performance factor strictly connected to the Prexima family tablet press.
• ff is the average feed factor of the volumetric LUMS feeder for each dimension of screw with magnesium stearate as material.
• ωLUMS screw screw speed of the volumetric LUMS feeder. 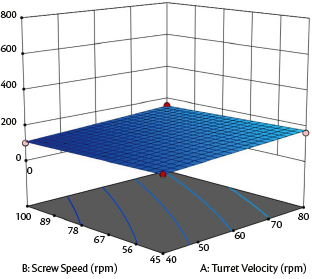 The aims of the trial have been accomplished: both tablet press sides receive the same amount of lubricant using only one piece of equipment, with no additional costs and utilities to guarantee correct lubrication efficiency. Furthermore, the external lubrication process can be optimised by having quantitative experimental data that explain the whole design space created by the mechanical and process variables.
To conclude, a mathematical model has been created to help the user to speed up the decision process and minimise product losses during process optimisation.