Commercial applications of a residual gas analyzer for Lyophilization.

Process monitoring and sterility assurance are critical for ensuring batch quality and eventual product release for freeze-dried or lyophilized drug products. In freeze drying or lyophilization, drug products are susceptible to certain infrequent occurrences of contamination that can pose a significant risk to product quality. In addition, the use of process analytical technologies in maintaining the assured state of a validated process is important for continued process verification. FDA’s guideline UCM074909 on Freeze-Drying process also refers to the necessity of monitoring the leak rate of a system periodically to maintain its integrity and to investigate and determine the actual leak site for the purposes of repair should the leak rate exceed the specified limits. It further goes to emphasize that the leakage into a lyophilizer may originate from various sources. It may be a leakage occurring from the atmosphere or outside environment into the vessel itself or from other media sources employed throughout the system. One of these is silicone oil used as a thermal fluid for heat transfer in the shelves of a lyophilizer. Proposed revisions to Annex 1 also indicate a regulatory appetite to include the detection of contaminants such silicone oils and other hydraulic fluids in lyophilizer leak testing protocols.
In this paper, we discuss experimental approaches aimed at effective sterility assurance with respect to contaminant detection using mass spectrometers.

Testing using gas permeators show a linear correlation between the Quantum mass spectrometer’s measured ion current and the injected 5cSt silicone oil PPM. In this testing, the PPM of silicone oil was determined by measuring the mass difference from the calibration tubes in the gas permeators. The results are shown in Fig 2. 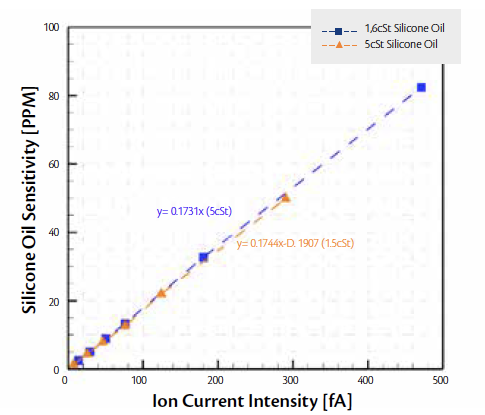 This test proves the sub-1PPM detection capabilities of the mass spectrometer under consideration. However, the temperatures used in this test to generate silicone oil vapors are much higher than normally achievable inside a lyophilizer. Hence, actual testing under vacuum conditions in a lyophilizer was necessary to determine the capability of the Quantum mass spectrometer for leak detection.

Fig 3 below shows the results of the 5cSt silicone oil testing using the Quantum mass spectrometer in Lyofast3 freeze dryer. The mass spectra for three different oil volume samples in the same 2.3 m2 chamber were compared at the same relative time (t=21 mins after start of sampling) from the start of the test. Fig 3 (left) shows the three scans. It is evident from the plot that an increasing quantity of silicone oil in the chamber corresponds to an increasing max oil ion current.

The 150 mg sample in this case shows a peak value of close to 0.6 pA for silicone oil. In similar tests which were repeated with the same quantities of silicone oil, plot 3 (right) show the PPM value derived from the ion current. In this test, the sampling was started at higher pressures of the chamber to allow for capturing the evaporation of silicone oil. This can be seen in plot 3 (right) where the PPM value initially increase with time, peaking around time t=15 mins when the conditions of pressure and temperature in the chamber allow for maximum evaporation of silicone oil and then continue dropping over time. Similarly, several experiments were also conducted in a large scale 40 m2 shelf area Lyomax40 lyophilizer. A table below shows the total silicone oil used in one such experiment and the total loss of silicone oil during the experiment. In this freeze dryer, similar tests were performed with total quantities of silicone oil varying from 2 g to 10 g. The 2 g sample of silicone oil distributed over 5 petri dishes failed to produce a detectable ion current in the mass spectrometer. However, samples of silicone oil 4g onwards were successfully detected as shown by the plot of Ion Currents and PPMs vs time for different quantities of oil in Fig 4.

In the above test, all petri dishes were placed on the same shelf in the center of the chamber. However, one test with a quantity of 8 g of silicone oil was repeated by placing the petri dishes evenly distributed between shelves 8-15. Thus, instead of all 20 petri dishes on one shelf, two petri dishes per shelf were placed on ten shelves in the same 40 m2 freeze dryer. Fig 4 (right) below shows a comparison of the results. It can be seen that there is not a significant difference between the results obtained from these two tests indicating that the total quantity of silicone oil is a much larger contributor to a successful detection of silicone oil as opposed to the distribution of the oil inside the chamber. Note that this procedure is for leak detection only and results will vary from this testing if a leak occurs during a freeze-drying process where large quantities of water vapor and nitrogen are present in the freeze dryer. IMA Life has conducted several numerical studies for determining the optimal port location for contaminant leak detection. 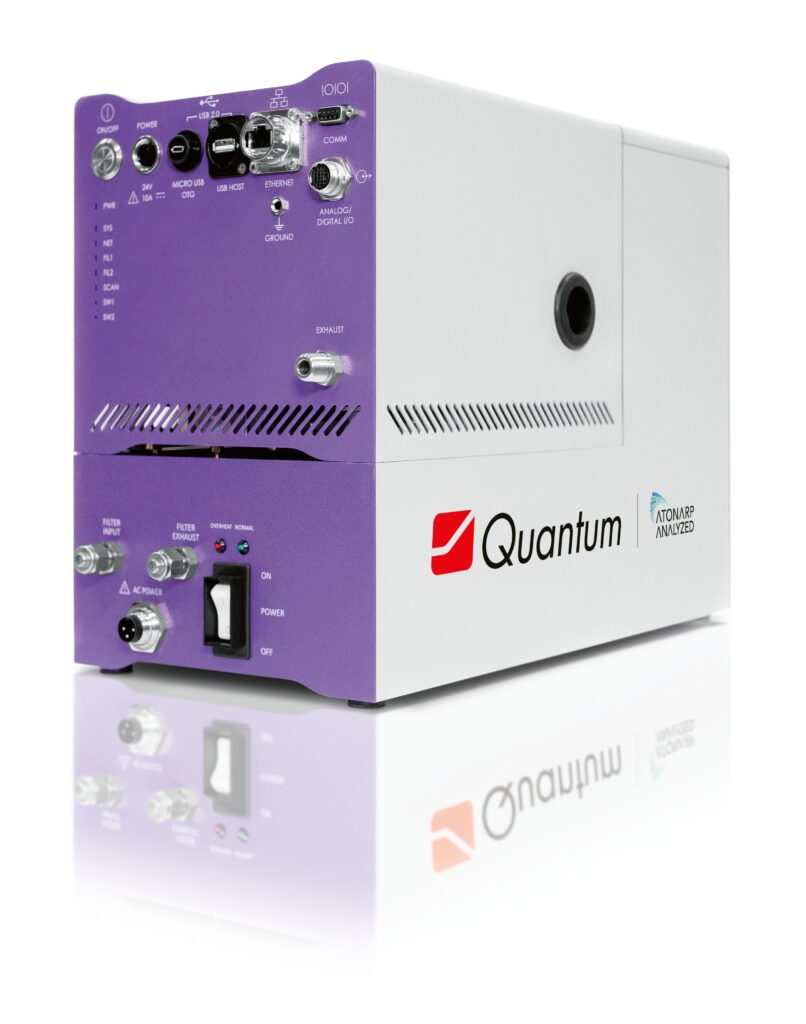