How to monitor HPMC concentration through conductivity measurement 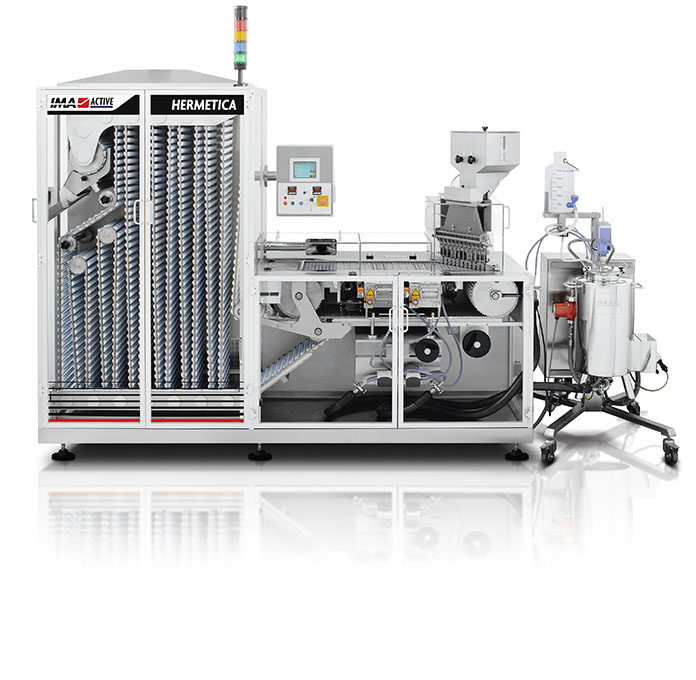 The capsule sealing process is primarily targeted to avoid the counterfeit: a sealed capsule can be opened only by breaking it in two parts. Therefore, it is impossible to replace its content without compromising the capsule integrity.
The sealing of capsules is performed by applying a solution of gelatin or hydroxyl propyl methylcellulose (HPMC, commercially known as Pharmacoat® 603) on the junction between the capsule body and cap. While the sealing with gelatin solution has been used successfully for years, the sealing with HPMC is relatively new.

HPMC capsules have some advantages respect to the gelatin capsules:

• Lower and stable amount of moisture.

• Higher reproducibility of the manufacturing process.

• Better customer acceptability: gelatin is of animal origin while HPMC is obtained from vegetals.

• Improved release profile of some APIs.

The machine is composed by the loading hopper, for capsules feeding, the sealing group, characterised by sealing baths and sealing discs for the application of the ring on the capsules, the drying group in connection with the ventilation unit through rigid pipe, and finally by the sealing solution preparation group containing control instruments for viscosity and electrical conductibility. Because of ethanol presence in the solution and the consequent development of fumes, sealing, solution preparation and part of drying groups are made according to ATEX regulations.

Purpose of the process is to apply a sealing ring to the capsules. After loading the capsules into the feed hopper, these are aligned in specific cavities where the central part is bottomless to receive the banding solution, that is taken from the bottom of the vessel using peristaltic pumps and transferred in the sealing baths. Another group of peristaltic pumps removes the excess solution from the sealing baths and sends it back to the vessel: consequently the solution is subjected to recirculation. In the sealing baths there are sealing discs that apply the ring in the central part of the capsules.
The capsules are then transferred in the drying box and, after solvent evaporation, they are ejected from the discharge hopper.
Concentration control with viscometer has not provided good results due to the imprecision and the non-reproducibility of the measurements. The reason is the stratification of the solution, however trying to reduce this phenomenon by stirring the product, it causes repercussions on the vibration sensor that needs a motionless system.
Therefore, controlling the concentration through electrical conductivity measurements, has been considered a valid alternative.

Several tests were made to find a correlation between concentration and electrical conductivity.
In the range of interest (12-25% of HPMC) the sealing solution was gradually diluted, so concentration and conductibility values were recorded for every dilution.
A refilling solution, 50:50 w/w water and ethanol,  was used to contrast solvent evaporation during the sealing process. For concentration evaluation a thermal analyzer is used: 500 mg of the solution are deposited on the weighing plate and heated to 200°C.
The instrument returns the percentage of moisture lost to evaporation, which, subtracted from 100% gives the percentage content of HPMC (dry residue). 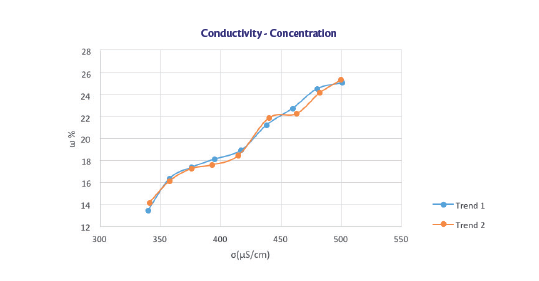 From the figure the trend of the concentration with the conductibility is growing. Slight deviations from linearity can be attributed to interactions between the polymer chains and the solvent.

Compared to static tests of the laboratory, the sealing process, conducted in the machine, is more complex because of the recirculation factor of the product. It causes an increasing of the evaporation surface. Furthermore due to the presence in the refilling solution of water and ethanol and of their different evaporation rate, in time there is a slight increase in conductivity, despite the concentration remains constant, thanks to the higher conductivity of the water. So considered a generic test “1” as a reference, the trend line obtained has been employed as line of first attempt.

The line [y = 0.0259x + 7.2948] has been used to predict the concentrations of the next tests and, as the following figure shows, the angular coefficient can approximate the experimental data, while the intercept identification is not so immediate.

Comparison between experimental and theoretical concentrations

To optimize the intercept value the standard deviation, Σ (ω sp – ω teo) ^ 2, has been minimized through generalized reduced gradient method to have the minimum difference between experimental and theoretical concentrations. The angular coefficient is the general trend of the concentration with the conductivity, while the intercept depends on all those factors that vary during the sealing: temperature, evaporation rate, mixing rate, different water-ethanol ratio in time.
Since during sealing tests the concentration remains constant, the conductivity varies in a range between 440 and 520 μS/cm and at 20% of HPMC the conductibility is on average 480 μS/cm, the intercept value obtained is 7.568. Here the equation of the line found.

The line represents the equation to control average the concentration of the polymer during the sealing of capsules based on electrical conductivity measurements.
In the case of gelatin sealing the refilling solution is added when the viscosity exceeds a threshold value which remains constant in time, in HPMC sealing instead, due to the different water-ethanol ratio in time, the conductivity threshold value increases by about 10 mS/cm per hour.

Another set of data was obtained from a sealing trial performed on capsules supplied by a Customer.
Due to the specific request, the refilling was made not in the sealing solution tank but in the sealing baths, which were exposed to the atmosphere with a consequent increase in the evaporation rate and greater difficulty in maintaining concentration constant. Below can be seen table and graph of the test.

As can be note from the graph, the data obtained were higher than those estimated theoretically from the equation (red and blue curve).
The trend is parallel to the theoretical one, except for the outliers (black and orange circle) that were observed immediately after diluting manually the solution.
The stirring plays an important role in keeping uniform the solution. If left static, the values can differ due to the formation of layers of different concentration.
Therefore, in the sealing baths, where there is no agitation, the values tend to be somewhat lower if compared to the tank where the solution is under constant mild stirring (data from previous tests). If a correction of approximately 50 uS/cm is applied, it can be seen that the two trends (theoretically calculated and the experimental data with the correction, green and purple curve) are more similar. This correction doesn’t influence the slope but the intercept of the equation, which is the only factor influenced by experimental conditions (temperature and stirring rate).

The relation obtained represents the more accurate description reached, however other tests are necessary to definitively verify the reliability. It is also required further check of the water-ethanol ratio control during the sealing process in order to get the polymer concentration the only variable affecting the conductivity.