Paenterally delivered drugs have gained popularity over the last decade because of their ability to act immediately, lexibility to be administered in a controlled manner and superior compliance as compared to oral medications.1 In addition, freeze dried parenterals also offer significantly improved storage stability for liquid formulations that otherwise do not offer an acceptable storage stability.
Due to the above mentioned factors, the global market for lyophilized pharmaceuticals have crossed $5 billion mark in 2018,2 and an average of 4.2 % growth forecasted until 2028, primarily driven by steady growth in the oncology and vaccine segment.3
To cater for a steadily increasing demand for freeze dried parenterals, drug manufacturers are increasingly focusing their attention towards operational bottlenecks commonly associated with use of conventional rubber stoppers and metal caps in an aseptic GMP environment. For example, during the stoppering step, rubber stoppers can stick to the underside of the lyo shelves causing vials to fall, which in turn, can result in broken vials and batch rejects.

In addition, regulatory guidelines (e.g. – US FDA chapter56 on drug quality assurance) mention that stoppered vials should be crimped in a separate chamber located outside of the filling isolator to eliminate the chances of metal particle generation.4 Compliance with these guidelines also necessitates the need for a separate bowl feeder for crimping operation, resulting in an overall increase in the drug production cost.
To eliminate the above mentioned bottlenecks in aseptic freeze drying operations, the parenteral packaging industry is increasingly investing in efforts resulting in next-generation engineering solutions. One such engineering solution consists of a preassembled container closure system (CCS) containing a rubber stopper nested in a plastic cap. This CCS solution fully eliminates the need for a separate crimping operation, which in turn, results in reduced foot print and cost saving via elimination of extra isolator operations and real estate.
Also, several minor or cosmetic defects associated with the capping process, which do not necessary lead to leakages and CCI (Container Closure Integrity) failure, are responsible for the majority of rejections and recalls in commercial manufacturing8. Those rejects and recall are not only impacting the overall cost of non quality but also the potential availability of the drugs on the market. These ready to use (RTU) or ready to sterilize (RTS) CCS operate on a ‘press-seal’ principle and possess in built tamper evident features which clearly show up when the sealed container has been opened.5 However, it is important to realize that the design of any stopper, by itself, has a significant potential
to influence the lyophilization process.5 Therefore, selection of a suitable CCS including its primary elastomer component (i.e. rubber stopper) is critical for a successful lyophilization operation.6, 7.

With this information in mind, it is important that introduction of a new CCS should be accompanied by a relevant testing strategy which enables quantification of minute differences in lyo process variables resulting from introduction of the new CCS, as well as the possibility to close the vials directly into the lyo.
This article presents the testing strategy which can be used for quantifying such lyo process variations resulting from introduction of a new CCS and discusses the experimental results. For the purpose of this testing, we have been using the RayDyLyo® snap-fit cap manufactured by ARaymondlife (ARaymondlife – 1 Rue Louis Besancon – 38120 Saint Egrève – France – https://www.araymond-life.com).

The main objective of this paper is to study the effect of preassembled press-seal CCS on lyo process variables like mass flow, product temperature and the vial heat transfer coefficient (Kv). The secondary objective of this study was to validate the possibility to close the vial directly in the lyo, thus avoiding the use of a separate crimping station.

One tray (126 vials) of 20 cc molding vials were filled with 5 mL water for each experimental run.
Two independent experiments were carried out under identical process inputs to investigate the differences in process variables generated by change of the stopper type (RayDyLyo® preassembled with igloo rubber stopper nested in a plastic cap vs conventional igloo vent rubber stopper). The product temperature were measured using type T-thermocouples and the mass flow rate was measured in real time using Tunable Diode Laser Absorption Spectrometer (TDLAS).
At the end of the process, the vials were closed in the lyo (hydraulic pressure of 66 barg and dwell time of 30 seconds) and evaluated for completed capping.

For comparison purposes, process plots of lyo cycles with CCS vs conventional igloo stoppers are extrapolated over each other. Briefly, the product was frozen at -45 oC for 3 hours in the IMA Life Lyofast 3 (2.3 m2) freeze dryer. The product chamber was then evacuated to a pressure of 50 µbars and shelf temperature was kept constant at 0 oC throughout the duration of the experiment. The chamber pressure was incrementally increased form 50 µbars to 200 µbars with 2 hours of residence time at each chamber pressure to achieve steady state conditions.

The mass flow data comparison between press-seal CCS vs conventional igloo stopper clearly shows a 70% to 77% reduction in mass flow for press-seal CCS at chamber pressures used in this study. 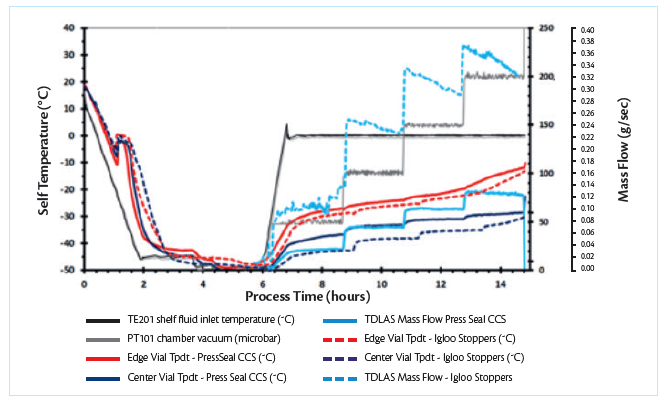 4.4. Effect on Kv
Vial heat transfer coefficient (Kv) of a vial is the area normalized heat flow from source to the sink in a freeze dryer. The major factors that affect heat flow to the frozen product inside a freeze dryer include conduction from shelf (via heat transfer fluid circulation), radiation from lyo door, side walls and adjacent shelves and gas conduction
(especially at higher chamber pressures).

4.5 Closing of the vials

Ensuring CCI (Container Closure Integrity) over the product shelf-life including manufacture, storage, shipment, and intended use is one of the most critical aspect in the development and commercialization of parenteral products.8 Validating the proper closing of the vial in the lyo is therefore a must do for these CCS. At the end of the lyophilization process, the vial were closed directly on the shelf using the parameters recommended by the CCS manufacturer. All vials were inspected for completeness of the closing. 100% of the vial were properly closed, thus guarantying a proper Container Closure Integrity.

Experimental determination of lyo process variables generated due to different container closure systems were carried out in the current study. The data clearly shows that process variables like mass flow and product temperature varied significantly between press-seal CCS and conventional igloo stoppers. Due to presence of a plastic cap above the nested stopper, the mass flow in vials with press-seal CCS was lower by a factor of 3.3 to 4.6 than vials with conventional igloo stoppers.

Overall, the data generated in this study unequivocally shows that newer press-seal stoppers/CCS can significantly impact the process variables like mass flow and product temperature. Therefore, these preassembled stoppers/CCS should be employed in an aseptic freeze drying process only after thorough evaluation of lyo process variations.

Emergence of newer press-seal container closure systems (CCS) with pre-assembled rubber stopper and plastic cap is a significant effort towards optimization of parenteral drug manufacturing operation. In such CCS, capping is achieved by the application of simple vertical pressure during the stoppering step inside a freeze dryer. Elimination of the crimping operation via these CCS generates cost saving in an aseptic fill to finish operation by allowing the process to be fully contained inside closed systems like isolators and restricted access barrier systems (RABS).

However, the experimental data discussed in this white paper conclusively shows that that introduction of such CCS should be accompanied by a qualification strategy that quantifies the differences in lyo process variables like mass flow and product temperature.

Such proactive testing strategy can potentially save loss of an entire batch of freeze dried product when product temperature runs close to the formulation collapse temperature. The difference in Kv will also impact the scale-up of the existing freeze drying cycle from one dryer to another. Additionally this experiment also confirms the possibility to directly close the vials on the lyo shelves, ensure a proper CCI (Container Closure Integrity) and eliminate the use of an additional crimping station and all the cost associated with it.