The European regulation n°517/2014 of May 2015 implies a drastic reduction of fluorinated gases with high impact on global warming. Moreover, in 2020, the use of commonly used refrigerant in freeze dryers may be prohibited for maintenance or service of refrigeration equipment. A new solution which uses an air based refrigeration system is presented here below.
The refrigeration gas being replaced by air is referred to as the ultimate natural refrigerant.

During the last 20 years, the gases used in refrigeration systems have been subject to restrictive regulatory measures at European level in order to limit their impact on the environment. The F-Gas Regulation has been further amended, especially implying a drastic reduction of fluorinated gases with high impact on global warming.
The European Regulation No. 517/2014 of 20 May 2014 has modified F-Gas legislation. This is in effect since January 2015 and involves a gradual reduction in the production of these fluids with allocation of quotas. Also in 2020, the use of any refrigerant with a Global Warming Potential (GWP) of more than 2500 kg Eq. CO2 will be prohibited for maintenance or service of refrigeration equipment having a load greater than 40 t Eq. CO2 (corresponding to 10.2 kg R404a). The R404A is commonly used in freeze-drying facilities but its GWP is 3922. Although the new law provides an exemption for applications which cool products at temperatures below -50°C, it is time to question the solutions for the future. New refrigerants have appeared on the market with a GWP below 2500. They generally involve restrictive conditions of use, and may not conform to future regulatory changes.

IMA Life now propose to equip its freeze dryers with a new refrigeration technology using the ultimate natural refrigerant “air”. The system is based on a series of compression/cooling/ expansion steps of air, which can be cooled to a temperature as low as -100 ° C.

• More economical than LN2 when running cost is taken into account.

For the manufacture of its freeze dryers, in the 1990s IMA LIFE established a partnership with Mayekawa, a company recognized as a provider of refrigeration solutions. Since then IMA Life equipped the majority of its freeze dryers with dual-stage screw compressors from Mayekawa.

Today, IMA Life and Mayekawa propose this new refrigeration technology referred as PascalAir. Air is a familiar gas, without any effect on the ozone layer or causing global warming. It is neither toxic nor flammable. Its critical temperature of -140.7°C is low, and when air is used at a higher temperature range, it becomes a gas cycle without phase transition. The Brayton cycle is applied as the basic cycle of this refrigeration system. As shown in Figure 2 , the adiabatic compression (1 > 2), the heat dissipation Q1 (2 > 3), the adiabatic expansion (3 > 4) and the heat absorption Q2 (4 > 1) are carried out in gas phase. That is to say, the process of heat dissipation (Q1) and heat absorption (Q2) is a cycle conducted in the gas phase, and under constant pressure without condensation or evaporation. It is a simple system as the equipment consists of a compressor, a heat exchanger (heat absorption and heat dissipation) and an expander.

The air refrigeration system PascalAir directly circulates ultra-low temperature air as the refrigerant inside a refrigerator/freezer and it is composed of three parts:

• An expander integrated with a compressor (compression and expansion). 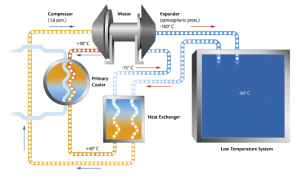 1) Air is taken from inside the refrigerated system at atmospheric pressure and sent to the heat recovery heat exchanger.

2) In the heat-recovery exchanger, it exchanges heat with the air which arrives from the primary cooler and becomes air at 35°C.

3) 35°C air is compressed by the turbo compressor and becomes air at 90°C and at 1.8 atm. After that heat is dissipated in the primary cooler to bring the air temperature down to 40°C.

4) 40°C air exchanges heat in the heat-recovery exchanger and is cooled down to -75°C.

5) Air at -75°C and 1.8 atm. is adiabatically expanded in the turbo expander. It reduces its temperature down to -100°C at atmospheric pressure and is blown into the refrigerated system.

The expansion step uses the energy of expansion through a turbo expander to help drive the compressor. The compressor power is then reduced significantly and operation becomes highly efficient. When applied to freeze drying, the PascalAir system is combined with a flow cooler in order to cool the various circuits (shelf circuit and condenser coils). It is referred to as PascalFC  (for F low C ooler). The COP (Coefficient of Performance) is almost constant when compared with conventional compressors. However, the use of the PascalFC system is really justified for temperatures below -60°C as its COP becomes superior from that point on.
A 30kw PascalFC system has an equivalent COP to a single 50hp screw compressor at -60ºC evaporator temperature (60Hz). Its capacity is almost fixed, and as such, far less dependant on the evaporation temperature.
Due to the fixed output of the Pascal system, the cool down time would be longer than a conventional screw compressor system.
As a consequence, in order to apply a PascalFC system to a freeze dryer, the energy needs to be stored in a buffer tank.

2. The PascalFC system; application to a freeze dryer

For a freeze drying application, Novec™ HFE-7100 heat transfer fluid is circulated through the PascalFC unit, and stored in a buffer tank in order to assist in cooling the freeze dryer shelf and condenser circuits.
On the shelf circuit, heat is exchanged from the buffer tanks main cooling circuit to the shelf cooling circuit by means of a heat exchanger. The fluid being circulated through the shelves can be a standard silicone oil (5cst) of a similar fluid to the HFE-7100.
On the condenser circuit, HFE-7100 is circulated directly through the ice condenser coils.
The condenser circuit is similar to a fluid condenser and its running conditions during the drying cycle are much easier to control. However, special consideration must be taken to manage the heat transfer fluid system during and during post-SIP. Novec™ HFE-7100 heat transfer fluid was chosen for three main reasons. The first selection criterium is safety. Unlike traditional silicone oil heat transfer fluids, HFE-7100 has no flash point, and therefore presents no fire risk. This makes it the safest possible solution, and is particularly advantageous in the condenser circuit, where the fluid is present whilst the condenser reaches high temperatures during the SIP phase.
Secondly, HFE-7100 was selected among safetherm fluids due to its low viscosities at low temperature. In order to maximize the utility of the buffer tank, the fluid must be stored at a low temperature (< -70°C). 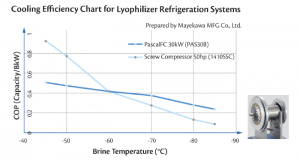 Traditional safetherm fluid (HFE-7500) has a kinematic viscosity of nearly 60 csk at -85°C. This high viscosity creates excessive load when circulating large volumes of fluid through the system. HFE-7100, on the other hand, has a kinematic viscosity of approximately 4 csk, which is much easier to circulate, and therefore much more conducive to our application.
Finally, the oil is trapped in the condenser during the SIP phase, when temperature and pressure are increased to SIP values. In choosing a heat transfer fluid, it is preferable that the fluid does not boil under these conditions. HFE-7100 will not reach its boiling point under these conditions and therefore it is an acceptable solution. Such a refrigeration system combination can be ultimately connected to several freeze dryers. One or two PascalFC units will maintain a buffer tank filled with Novec HFE-7100 at a constant and low temperature. A loop is distributed from this buffer tank to several freeze dryers. Each freeze dryers can be individually and independantly controlled, using a refrigeration system running on the ultimate natural refrigerant, being air. 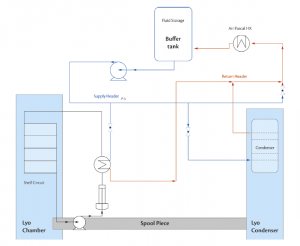