Recent works have evaluated the potential of minitablets contained into hard gelatine capsules. [3, 4, 5] In order to get the benefits and advantages of multiparticulate dosage forms, it is necessary for tablets of between 2 mm and 4 mm diameter to be used. Tablets larger than 4 mm could not be contained in a hard gelatine capsule in any great number as well as tablets smaller than 2 mm would be extremely difficult to manufacture. Studies have shown that tablets of this size have a similar emptying pattern to standard pellet formulation. [6] The demonstration of the feasibility to obtain Ibuprofen minitablets alternative to pellets was the performance of a comparative study of the two enteric coated solid forms.
Generally, the reasons for using an enteric coating are to protect the stomach wall from the effect of the drug contents in a dosage form or to protect the drug contents in a dosage form from the degradation effect of gastric contents. It can also be used to deliver the active ingredient to the particular region of the intestine (e.g., the upper part of the small intestine), so as to enhance the bioavailability of the drug. In any case, the multiparticulate dosage forms, consisting of a single dose of drug subdivided into many small dosage units, are the more suitable system to protect and delay the drug release. In fact, the multiparticulates disperse freely in the gastro-intestinal tract, maximize the absorption, minimize the side effects, and reduces inter and intra-patient variability. [1] Enteric coated pellets contained within a hard gelatine capsule are widely used as a protection or delay release device; an alternative to the coated pellets may be the coated minitablets contained within capsules too.
Pellets and minitablets are two different drug delivery systems showing different difficulties to apply the enteric liquid, particularly when the film coating is obtained from aqueous polymer dispersions. Shape, size, surface, porosity, density, hardness and friability of pellets obtained by powder layering are different from those of minitablets obtained by granulate compaction. Even if the nature of the substrate used may be basically equivalent, the variations of such physico-mechanical properties may influence the film adhesion as well as the uniformity of distribution of the coating on the surface of every unit in the batch. Consequently, the enteric coating of these different dosage forms needs specialized coating equipment very efficient in the operations of mixing, spraying and drying.
The GS Coating System is an innovative automated pan equipment drying air system that drives the air across the core bed by means of two immersed perforated swords (Figure 1). It is considered the most efficient air-handling system which mimics the fluid bed technology.[2] 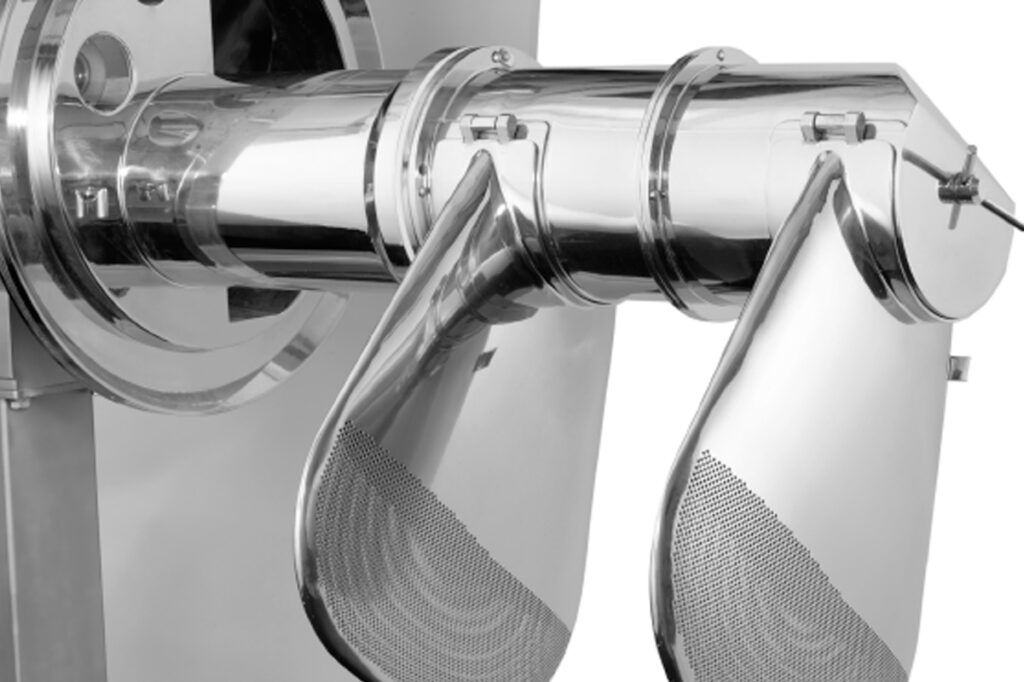 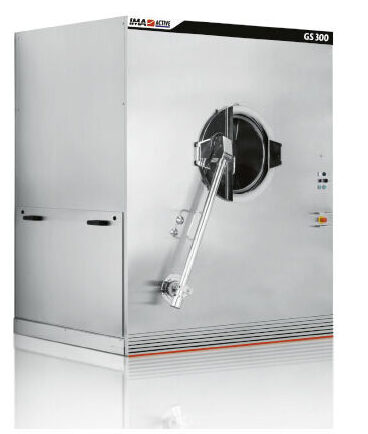 The aim of this work was to evaluate the feasibility to obtain a multiparticulate solid oral dosage form alternative to enteric coated Ibuprofen pellets. 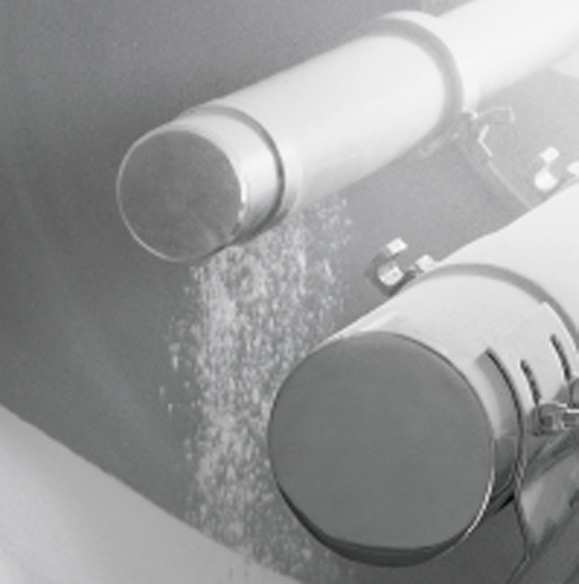 Granulate containing drug and active surface agent (same ratio used for pellets) was compressed on an instrumental rotary tablet press, equipped with small concave punches of a 2.5 mm diameter. Tableting speed was maintained at 24 rpm: tablet thickness was set near the diameter size and the compaction force of 8 kN was applied.

Pellets and minitablets were coated in the same GS pilot 7.1%, Syloid 244 3.1%, Eudraflex 2.1%, purified water 53.3%. Pan loading was defined on basis of apparent volume of the products, so the core bed remains at the same distance from the spray nozzle. The coating conditions applied to both the multiparticulate dosage forms were as follows: load volume, 15 litres; pan speed, 12-15 rpm; inlet temperature, 65° C; core temperature, 35°-36° C; spray rate, 30-40 g/min; nozzle port size; 1.2 mm; atomising air pressure, 1.0 bar.
During the coating process 100 g of products was withdrawn after the application of 4 and 6% coats and dried in a lab pan at 50°C for 1 hour. The coating was then completed up to 8% coat and the drying was performed as described above.

Tests such as sieve analysis, apparent density, friability, were performed as previously reported. [2] The dissolution rate from enteric coated pellets was assessed according to USP 23 method A, page 1795 (apparatus 2, 100 rpm, 37°C, acid stage: 750 ml of 0.1 N hydrochloric acid for 2 hours and buffer stage: add 250 ml of 0.20 M tribasic sodium phosphate and adjust to a pH of 6.8).

The physical characteristics of pellets and minitablets are collected in Table 1.

Table 1: Physical properties of the multiparticulate products before the enteric coating process.

As above mentioned two different kinds of particulate substrate have been selected. Pellets are much smaller, denser, more friable, more porous, less resistant and have a more extensive surface area than minitablets. When the pellets were submitted to the coating process, they were observed to move rolling faster and more uniform than minitablets, so the pan speed was adequately adjusted. Nevertheless, the difference of porosity between the compacted and layered materials, a good adhesion of the polymeric film to both the substrates was pointed out in the initial phase of coating process. Sticking was prevented by slowly spraying the coating dispersion for the first fifteen minutes.

Even if the pellets are individually smaller, they showed no tendency to aggregate throughout the coating process.
Data relevant to processing and technological features of the coated products are reported in Table 2.

Obviously, the duration of the coating process of minitablets was shorter than that of pellets because they have lowest surface area to volume ratio and require a lower level of polymer coating than pellets or granules with irregular shape and rough surface. The coating application yield more than 98% for both dosage forms as well as the weight uniformity showing a good distribution of film on the substrates, demonstrate clearly a good performance of the GS coating system.

The release profiles relevant to both uncoated and coated multiparticulate products are shown in Figure 3 (pellets) and Figure 4 (minitablets). 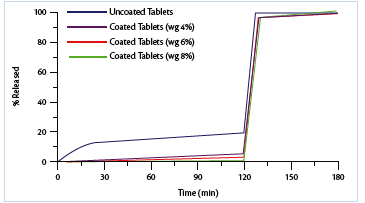 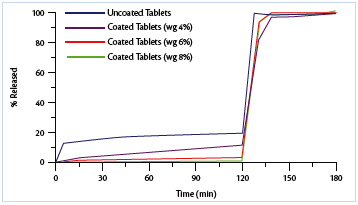 Both the enteric coated multiparticulate dosage forms complies largely with the gastro-resistance specifications of acceptance limits. The coating efficiency is resulted higher for the pellets, even if their surface area (mathematically calculated) is about three times more extensive than that of minitablets.

The results of this work have shown that minitablets are a good alternative solid dosage form to pellets. Both enteric coating processes were performed on the same equipment, GS coating pan HP025 standard configuration.