DSMC simulations of vapor flow and ice dynamics in a freeze dryer condenser.

Freeze-drying is a low-pressure, low-temperature condensation pumping process used in the manufacture of biological and pharmaceutical products. It involves a 3-stage process initiated by freezing (A-B), then reducing pressure below the triple point (B-C). Heat is then provided for sublimation of the ice in the primary drying (C-D). Performance of a freeze-dryer is governed by the vapor and ice dynamics in the low-pressure environment. One of the most important physical processes relevant to the freeze dryer design is the formation of ice on the condensing surfaces during the drying stage. Non-uniform ice growth on the coils hinders the vapor trapping capability of the condenser. Understanding and controlling the ice build-up is needed for improved freeze-drying systems.

Numerical Simulations: Direct Simulation Monte Carlo (DSMC) techniques are applied to model relevant physical processes accompanying low-pressure vapor flow in the condenser. Low-temperature water vapor molecular model is used in the DSMC solver SMILE to simulate the flowfield structure. One of the most important physical processes relevant to condenser design is ice accretion on condensing coils. The developing ice front is tracked based on the mass flux computed at the nodes of the surface mesh. Experimental Measurements: Ice accretion measurements in laboratory and industrial scale dryer under various loads and cycle parameters.

Effect of the Duct on Non-Uniformity

Simulation Parameters for Lyostar II: Mass Flow rate: 5 g/hr, Pure water-vapor, reservoir wall temperature: 273 K, surface mesh: 26,654 panels, sticking coefficient of 1 for coils. The presence of a duct between the product chamber and condenser increases non-uniformity by 65% at a sublimation rate of 5 g/hr.

Simulation Parameters for Lyostar II: Mass Flow rate: 55 g/hr, Multi Species: Water vapor and Nitrogen, reservoir wall temperature: 273 K, Sticking Coefficient of coils: 1 for water-vapor and 0 for N2, Duct pressure: 115 mTorr, Condenser Pressure, 70 mTorr. The presence of the non-condensable gas increases the resistance in the chamber. Thus, as the water-vapor enters the condenser chamber, it creates a narrow pocket around the duct exit where the water-vapor number density is highest and decreases away from it. Figure 4 presents the non-uniform ice accumulated on the coils over a period of 24 hours. The coils close to the duct exit have a maximum ice accumulation of 3.2 cm while that on the coil farthest away from the duct, drops to a mere 4 mm. The non-uniform ice growth can lead to a significant drop in the vapor trapping capability of the condenser. 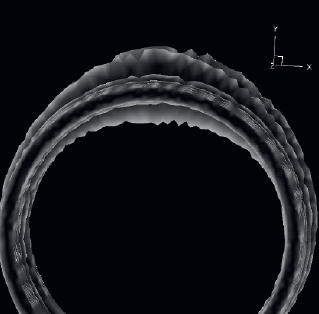 • For a typical laboratory scale freeze-dryer, the presence of a duct between the product chamber and condenser increases non-uniformity.

• The presence of non-condensable gases reduces the partial pressure of water vapor and effectively increasing the condenser resistance. This leads to a preferential

• The duct-less design of the integral condenser aids in achieving high drying rates and a more uniform ice distribution on the condensing coils.

• The DSMC modeling shows that the amount of water vapor entering the vacuum pump can be controlled by selecting the spatial location of the inlet with the overall water flow rate decreasing non-linearly with increasing distance from the centerline of the condenser.