Drug layering: the impact of up-scaling.

Incorporating an active ingredient in a coating formulation necessitates that both the process and equipment ensure uniform distribution of the coating material.
The majority of papers refer to the optimization of drug layering on cores in pan on small or pilot scales [1, 2]. However, it is crucial for the pharmaceutical industry to be sure that the coating uniformity is maintained and guaranteed also on production scale. 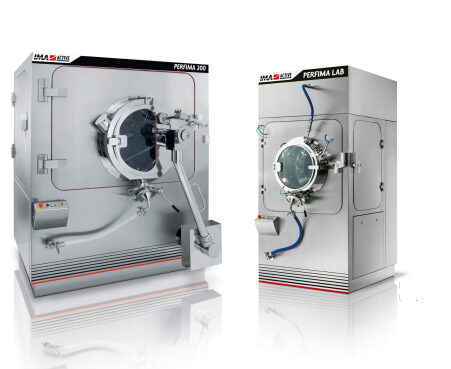 The first part of the work was aimed at identifying critical coating parameters leading to drug layering uniformity on a pilot perforated pan with different loads (small, medium and large).
Then we evaluated the impact of process up-scaling on the uniformity of coating distribution using production equipment featuring the same design and maintaining geometric similarity.

Tablets were coated in both pilot and production scale perforated pans; the two machines (Perfima Lab 30 liters drum, Perfima 200 liters drum, IMA) were designed maintaining the same geometric similarity, in particular pan geometry, mixing baffles design an spray apparatus [3]. Two different types of pan load (medium and maximum) were considered on both scales (Table 2). The target weight gain was 10% by weight. To assess the uniformity of coating distribution, three indicators have been evaluated:

Values lower than 6% indicate a good uniformity of coating distribution. Coating Losses were calculated as follows:

The Content Uniformity (CU) has been determined according to Eur. Pharm. 7 Ed as follows: the analysis of Riboflavine content was carried out on 10 coated tablets of each batch by HPLC method, using a SYNERGY MAX-RP C12 4 μ, 80 Å, 4.6 x 150 mm column and a mobile phase consisting of a buffer solution of KH₂PO₄ and Methanol (80:20).
The Riboflavine was eluted with a flow rate of 1.2 ml/min and detected using an UV-VIS detector at 266 nm.

The coating thickness was evaluated by Scanning Electron Microscopy (SEM ESEM- FEI Quanta 200) after cross-section of the tablets.

In-depth investigations of the remaining process parameters were performed: the results showed that 2 guns were necessary for both medium and maximum loads due to constant length of the cores bed. Moreover, the experiments demonstrated that, using atomization pressure of less than 2 bar and a pan speed of higher than 6 rpm, a good quality of coating was obtained.
The data showed that the optimal combination of parameters for both pilot loads (Table 3) resulted in a good coating distribution as demonstrated by the indicators of coating uniformity detailed in Table 4. The scale up of both pan loads was then performed; two batches of 125 kg and 160 kg were coated keeping the atomization pressure, gun distance, core temperature and total process time equal to the pilot scale and modifying the inlet air temperature, inlet air quantity, pan speed and number of guns (Table 3).

In Table 4 the indicators of uniformity of coating distribution for all batches are summarized.

The results of the study indicate that coating uniformity can be achieved on medium and maximum pan loads of the pilot scale and can also be easily up-scaled when the pilot and production equipment maintain geometric similarity.