Impact of the load in the development of VPHP cycles in an isolated line: analysis of a real case (Part 1).

Bio-decontamination using vaporised hydrogen peroxide (VPHP) is a technique applied in isolators, dedicated to the filling of sterile products, to guarantee the aseptic conditions required to start production have been reached. Dry bio-decontamination with VPHP in an isolator is developed by maintaining the concentration of H2O2 below the dew point and is made up of four phases:

Determined temperature and relative humidity conditions are reached inside the isolator and generator (warm-up phase), before injecting the VPHP in order to achieve a condition in the chamber that maximises the concentration of hydrogen peroxide in a uniform and repeatable way.

The 35% solution of H2O and H2O2 inside the VPHP generator is completely vaporised through the “flash vaporization” process and then injected into the chamber until all areas of the isolator have a uniform concentration level.

The concentration level is maintained for a determined length of time, known as “killing time”, important for reducing the microbial load (regulations generally set it as ≥ 106).

Removal of VPHP from the air and surfaces inside the isolator before production resumes. These phases are validated to demonstrate the effectiveness and reproducibility of the decontamination cycle. The present article analyses, through a practical case, the aspects of developing and validating a biodecontamination cycle with VPHP applied to an IMA aseptic, isolated line, focusing mainly on the choice of load to be positioned in the isolator. The definition of the load is a critical part of the validation process, as it precedes the start of all the VPHP cycle development activities and potentially influences the outcome of the validation. For further theoretical details on this methodology, see the technical article by A. Benassi and G. Cecere “The decontamination cycle with vaporised hydrogen peroxide (VPHP) in isolated filling lines: aspects of development, validation and criticality” – Part. 1 and Part. 2 at https://ima.it/pharma/case-studies/. The article was also published in the ASCCA news no. 2/2017.

Description of the isolated line

The analysed case involves an aseptic vial filling line, operating under isolation technology, installed at the production site of a multinational pharmaceutical company. The IMA isolated filling line subjected to the biodecontamination cycle with VPHP is structured in  three main sections, as shown in figure 1, which are designed to perform the following tasks:

1. Collect the sterile vials coming from the depyrogenation tunnel;

2. Fill the vials with liquid and then stopper them;

3. The material transfer isolator (MTI) allows the entry of consumables during production.

The isolator creates a physical barrier between the external production area where the line is installed (GMP classification C), the operators and the process area (GMP classification A). Reaching the aseptic conditions is guaranteed by the bio-decontamination cycle with VPHP with which the isolator is equipped and by the presence of equipment and utilities designed to provide optimum, aseptic conditions during production. For this project, the isolator is fitted with two different, standalone decontamination cycles:

The vaporised hydrogen peroxide, generated through the flash vaporization process in the VHP generator, is injected through a system of pipes that connects the generator to the nozzles in the isolator (figure 1 and 2). 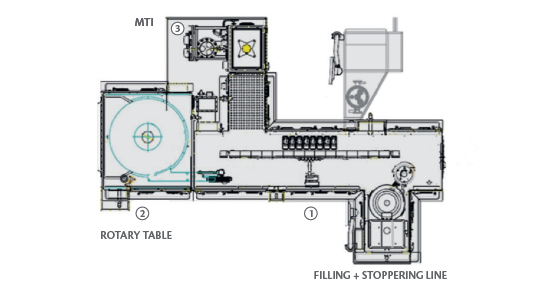 Definition of the load

Before beginning the cycle development, the “load” to be positioned in the isolator was agreed with the customer. The load is made up of machine parts and all the consumables (Petri dishes for microbiological sampling, cleaning/sanitising cloths, tools, etc.) essential for the customer’s production requirements. An example is shown in figure 3. The composition of the load was agreed well ahead of the validation activities to ensure that all the supports for the various components could be installed inside the isolator.

As outlined in the validation approach of the technical article by A. Benassi and G. Cecere “The decontamination cycle with vaporised hydrogen peroxide (VPHP) in isolated filling lines: aspects of development, validation and criticality” – Part. 1 and Part. 2, after defining the load and considering that the system envisaged the VPHP being injected directly into the chamber and downstream of the filters, a smoke test was run to simulate VPHP distribution inside the isolator. After analysing the videos of the smoke test, the areas that needed longer to be fully reached by the smoke were determined (figure 4). 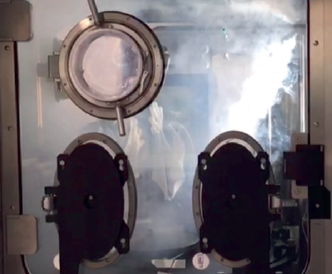 Figure 4: the figure shows the inside of the isolator a few seconds after injecting the smoke. The direction the smoke takes is visible and, as time passes, the parts that are reached most slowly by the smoke can be identified.

Following the thermal mapping carried out with probes as well as chemical indicators during one VPHP cycle, the points that showed the most thermal variability and a non-significant change in the chemical indicator were considered as challenge locations. The worst case locations inside the isolator were chosen, taking into account the smoke tests and the thermal and chemical mapping as well as geometric factors, the material load and the critical zones for production, in order to obtain a uniform distribution of points over the whole internal surface of the isolator. In this case, a total of 79 locations were chosen and defined. The points were photographed, numbered and documented, as shown in the example in figure 5.

Figure 5: the figure shows a section of the isolator with a schematic layout of the locations and a brief description.