The main objective of an aseptic process is to maintain product sterility by controlling and containing the risk of microbiological contamination.

The use of isolator technology significantly reduces this risk as it encloses within it a specific work area characterised by extremely limited human intervention and defined and controlled environmental conditions, obtained through the use of various systems such as microbial retention filters, automatic sterilisation or decontamination processes and prevention of re-contamination from the external environment.

The phases of the decontamination cycle with VPHP

The decontamination of surfaces inside the isolator occurs through the use of a sanitising and sporicidal agent which, in most Pharma guidelines, is recognised in Vapour Phase Hydrogen Peroxide (VPHP).

The vaporised hydrogen peroxide registered at the Environmental Protection Agency (EPA) as a sterilising agent offers numerous other advantages, especially if contained in a chamber below the condensation point, since it:

The decontamination process with VPHP inside an isolator envisages two main decontamination mechanisms: dry and wet. The difference between the two lies in the concentration of VPHP in the chamber during the injection phase: for the dry cycle, the concentration of H2O2 is kept below the dew point, whereas in the wet cycle, a quantity of vaporised solution is injected to create an oversaturation of the air in the chamber.

The decontamination cycle is generally made up of four phases:

Let’s take a look at the four phases in detail.

The purpose of the dehumidification phase is to reach determined temperature and relative humidity conditions inside the isolator and generator (warm-up phase), before injecting the VPHP in order to achieve a condition in the chamber that maximises the concentration of hydrogen peroxide in a uniform and repeatable way. It is known that factors such as isolator dimensions and temperature and relative humidity can influence the duration of the dehumidification phase. Therefore, at the line design stage, it is important to appropriately size the HVAC that serve the isolator or the system supplying air to the generator (compressed air or the like).

During the conditioning phase, the 35% solution of H2O and H2O2 inside the VPHP generator is completely vaporised through the “flash vaporization” process and then injected into the chamber until all areas of the isolator have a uniform concentration level. As stated previously, for the wet cycle, this concentration is higher than that corresponding to the dew temperature of the solution, while for the dry cycle it is kept below to prevent the formation of condensation. In both cases, while the vaporised solution, which also contains water, is being injected, the RH% (relative humidity) of the air in the chamber rises.

Having reached the desired concentration of VPHP in the chamber at the end of the conditioning phase, this concentration must be maintained for a determined length of time, known as “killing time”, important for reducing the microbial load, which regulations generally set as ≥ 106.

The duration of the decontamination phase is verified using certified biological indicators, comprising Geobacillus stearothermophilus ATCC 12980 spores, inoculated on carriers (generally in steel), with known concentration and D-value that, in turn, are enclosed within Tyvek packaging. Chemical indicators are also used to measure VPHP distribution, which change colour following a change in pH due to the presence of hydrogen peroxide in the environment.

The aeration phase guarantees VPHP removal from the air and surfaces inside the isolator before production resumes and features various stages characterised by specific temperature and relative humidity set-points.

It may be effective to split the aeration phase into two stages:

The aeration phase also allows the temperature and relative humidity conditions required for production to be reached. 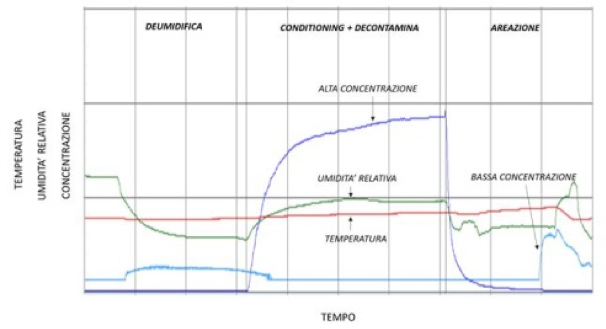 Factors that influence the decontamination process

The characterisation and effectiveness of the decontamination process depend on a number of factors, such as:

Relative humidity (RH%) and temperature of the air

The relative humidity percentage expresses the relationship between the quantity of water vapour contained in an air mass and the maximum quantity that it can contain in the same temperature and pressure conditions:

where PH20 is the partial pressure of water in the air and P*H20 (T) is the tension of water vapour at the considered temperature. If a water-hydrogen peroxide solution is present, its equilibrium conditions modify the parameters contained in the definition of relative humidity, in accordance with Raoult’s law. Taking that into account, it is possible to use the relative humidity measurement to define how far an air mass containing the water-hydrogen peroxide solution in vapour phase is from saturation condition.

Temperature of the surfaces

As introduced in previous sections, there are two main decontamination mechanisms with VPHP: dry and wet. The difference between them lies in the desired quantity of condensation during the injection into the isolator.

However, with the two types having the same decontaminating effect, the dry cycle brings with it greater advantages, such as:

All the above factors depend on the thermo-hygrometric conditions inside and outside the isolator (e.g. temperature of isolator glass or air ducts). It is therefore essential to verify the factors under real and final use conditions.

Next issue (Part 2) will focus on decontamination cycle best practices.

For further information you can apply at Iso_Tech@ima.it 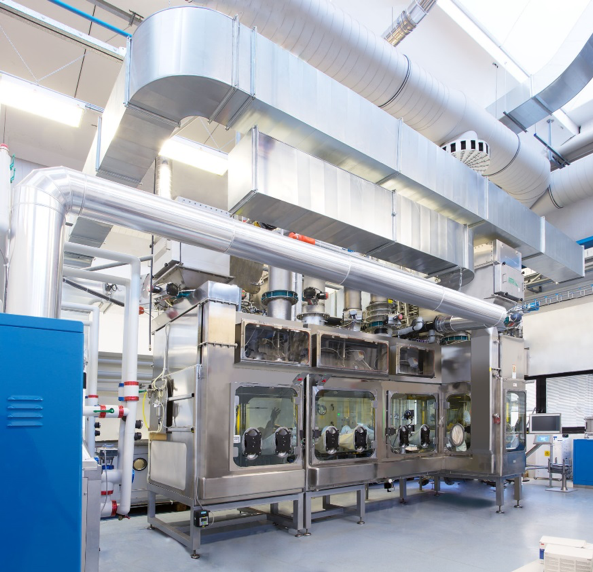