In the last decade, there has been a noticeable shift to move pharmaceutical manufacturing from a more traditional batch configuration to a continuous mode.

In the last decade, there has been a noticeable shift to move pharmaceutical manufacturing from a more traditional batch configuration to a continuous mode. The implementation of the Continuous Manufacturing (CM) in the pharmaceutical fields has been hindered by some hurdles including the investment risk and the regulatory impact. Nevertheless lately, there have been significant advancements in science and engineering to support the implementation of continuous pharmaceutical manufacturing as well as in the regulatory aspects. [1] Both pharmaceutical regulatory authorities and manufacturers acknowledge the benefits of Continuous Manufacturing processing over the traditional batch configuration, in terms of cost-reduction, improved efficiency, ease of automation, better controlled processing, reduced energy, reduced waste, less footprint, ease of scale-up, less material handling, and consistent product quality. [2,3,4,5,6,7,8]
Injection Molding (IM) is a rapid and versatile manufacturing technique used in the plastics industry to produce objects with different size, shape and, if needed, small details. [9] Under high pressure and temperature conditions, the fluid thermoplastic materials are injected into a mold. After the injection of the polymeric formulation, the molded item cools down and hardens into the mold cavities and is then ejected to complete the process cycle (Figure 1). 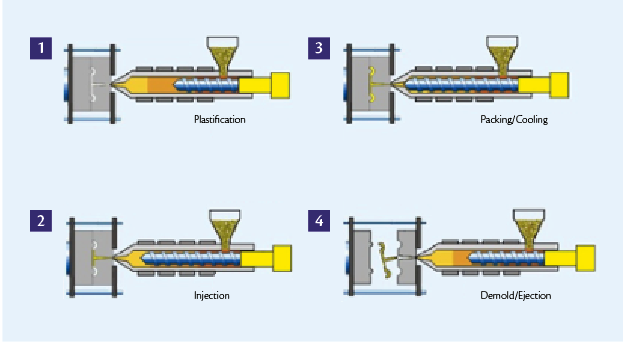 Hot-processing techniques, such as hot-melt extrusion (HME) and injection molding, would especially be suitable for fulfilling the needs of CM because many steps of drug product manufacturing can be skipped, the process does not require the use of any solvents, thus the manufacturing time and costs can be drastically reduced. [10]
The purpose of this work, which had involved a first step of pre-formulation and formulation studies, was to develop a process for the CM of uncoated tablets through a hot-melt extrusion and injection molding fully customized and patented machine called Extrusion-Molding-Coating, EMC.

A formulation based on a thermoplastic polymer and other excipients was developed to achieve a drug load as high as 80 wt%. API and excipients are not disclosed here for confidentiality reasons.
The drug substance, produced by the upstream units of the ICM plant (Integrated Continuous Manufacturing) at CONTINUUS Pharmaceuticals [3] (Figure 2a), is conveyed to the EMC unit (Figure 2b) for the continuous production of the drug product.

Figure 2: picture of the ICM plant (a) and EMC unit (b) at CONTINUUS Pharmaceuticals (Boston, Massachusetts, USA).

The drug substance is conveyed from the upstream continuous dryer to the loss-in-weight feeder dedicated to the API, which is placed above the twin-screw extruder of the EMC unit and in front of the loss-in-weight feeder intended for the excipients. The excipients gravimetric feeder is continuously filled with a pre-blended mixture of different excipients suitable for the final drug product quality attributes and process. Then both feeders continuously deliver the API and excipients in the correct API/excipient ratio to reach the desired drug load. The data shown in this paper refers to 70 wt% of API.
The powders are gradually processed by the extruder, which mixes the materials and applies shear under high temperature and pressure. The resulting homogeneous extrudate flows through the transfer manifold, which is the integration point between the extruder unit and the core injection unit. The transfer manifold is equipped with two optical grade windows, each one with its own adaptor and port, where PAT probes are installed. Then the extruded material enters the core injection unit with a specific process control algorithm. The core injection unit accumulates the material shot and then injects it into the mold cavities. The cavities, designed per the tablet’s shape and size requirements, are cooled down with a cooling agent that allows hardening of the molten formulation into the desired tablet shape. After the tablets are cooled and hardened, they are ejected and collected.
The EMC machine is also equipped with additional injection units which allow the Continuous Manufacturing of coated tablets too; with such machine set up, the tablet cores are injected and coated simultaneously. The results shown in the current paper include data referring to uncoated tablets only.

Quality control tests on the tablets

Tablet dimensions were measured with a Neiko 01407A Electronic Digital Caliper; tablets were weighted with a Mettler Toledo W3100-120 analytical balance; the API assay and impurities were analyzed by an Agilent 1290 Infinity HPLC; the drug dissolution from the tablets was performed with an Agilent 708-DS Dissolution apparatus I and the API solution samples read through an Agilent UV-VIS 8454 spectrophotometer; and the API solid state was verified with a TA Instruments DSC and Rigaku XRPD equipment.

As previously mentioned, the first part of the work was an intensive pre-formulation and formulation study carried out simultaneously with evaluation of process feasibility and development. After some testing for process cycle development and automation of the process steps, Continuous Manufacturing runs were performed.
The process cycle development targeted all process parameters including the critical parameters like the twin screw speed, material’s back pressure on the system, shot size for the injections, injection pressure profile, process individual zone temperatures, etc.
The tablets obtained over 3 continuous days of manufacturing (Figure 3) were fully investigated for the drug product quality attributes and the results are shown as follows.

Throughout the Continuous Run, the length, width and thickness of the tablets were measured. Figure 4 shows that the tablet dimensions throughout the run were reproducible.

All the individual tablet weights were compared to the average weight, and none of them exceeded ±5% of the average weight.
With regard to other tablet physical attributes, the mass loss of the tablets, after tested with the friability instrument, was on average 0.08% ± 0.01% s.d. (USP specification is ≤ 1%). Such a low loss of mass demonstrates the high resistance of molded tablets to mechanical shock, a favorable feature during tablet handling post-manufacturing.
The tablets were also tested with HPLC to ensure the API assay was between 95.0 and 105.0%, as required by the USP monograph. Figure 6 shows that all the tablets tested during the Continuous Run met this USP assay specification. 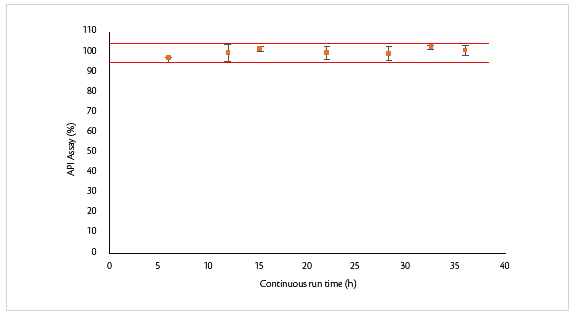 Figure 6: API assay of tablets during the Continuous Run.

Figure 7: (a) drug released after 45 min of dissolution test, and (b) whole drug release profile from tablets collected during the Continuous Run.

Increased temperatures in the EMC process can promote the degradation of the API to generate impurities.
To determine whether the EMC process produced “out of specification” degradation products, tablets were analyzed by HPLC for impurities. As illustrated in Figure 8, all tablets have impurity concentrations that meet the USP specifications (i.e., not more than 0.1% of any impurity and not more than 0.6% of total impurities). The amount of individual impurities is shown in Figure 8a, and the amount of total impurities found in the tablets in Figure 8b. The crystallinity of the API within the tablets was investigated through XRPD and DSC analysis (graphs ot reported here for confidentiality reasons). XRPD patterns confirmed that crystallinity of the drug was maintained throughout the process. More specifically, there were no major differences between the physical mixture and the tablet diffractograms, suggesting that the interaction between the polymers and the drug does not promote amorphization of the API. For further confirmation DSC tests were also performed, and the API melting peak was clearly detected.

Figure 8: (a) individual impurity levels, and (b) total impurities level in the tablets manufactured during the Continuous Run.

The formulation and the process development for the Continuous Manufacturing of tablets were successfully performed. The results of the analytical tests carried out on the tablets showed that the drug product met the target product profile. The tablets manufacturing was performed in a continuous fashion, proving that the process is capable of reproducibility over 24h/24 3 days. It thus can be concluded that:

1. it was possible to manufacture tablets via EMC over multiple days continuously,

2. the tablets produced met all the specifications,

3. the tablets physical attributes and pharmaceutical features were reproducible,

4. the process robustness was proved.

keyboard_arrow_left keyboard_arrow_right
Case Study, IMA Active
IMA Active and SAVIO Industrial: together for process optimisation.
The SAVIO pharmaceutical group is a group of businesses with entirely Italian capital dating back to 1925. With its headquarters in Pomezia (RM) and a...
Case Study, IMA Active
A Q&A on coating in Continuous Manufacturing.
What is the biggest advantage of coating with Continuous Manufacturing versus as a batch process? Bertuzzi: Further to the time saving due to side operations,...
Case Study, IMA Active
Application of acrylic enteric coating directly on soft gelatine...
Introduction Literature about coating soft gelatine capsules with aqueous, polymeric solutions or dispersions is scarce, and this process poses a tough...
Case Study, IMA Active
IMA Active and Alfasigma: a passion for research and technological...
A sense of belonging, curiosity, passion and responsibility are just some of the values guiding Alfasigma, one of the 5 main players in Italy’s pharmaceutical...
list View all updates
activate balloon:
main banner: