The production of mini-tabets for the sustained release of a drug is a promising area in pharmaceutical research.

The production of mini-tablets for the sustained release of a drug is a promising area in pharmaceutical research. Minitablets are multiple unit dosage forms, therefore they present all the advantages of these systems over the single unit dosage forms such as low risk of dose dumping, high degree of dispersion in the GI tract and reproducible bioavailability. Moreover, if they are manufactured by direct compression instead of granulation or extrusion and spheronization, the production is one step and leads to lower costs and higher production yields [1, 2].
Sustained release mini-tablets can be produced either as matrix or by coating the mini-tablets in a fluid bed apparatus [3]. Until now the coating of mini-tablets in a pan has not been extensively utilised [4]; however this process shows advantages over the fluid bed providing higher production capabilities, lower waste of coating materials and faster equipment cleaning time.

Aim of the study

The aim of this research was to investigate the possibility of manufacturing a sustained release multiple dosage form by coating in a solid wall pan mini-tablets produced by direct compression; theophylline was employed as a model drug and WAS, an innovative ready to use pigment dispersion, was tested to evaluate the possibility of reducing production time.

Coating process of 10 kg mini-tablets for each batch was performed in an IMA GS 25 L solid wall pan.
Two different coating formulae were used (Table 1): a traditional one containing single components to be previously dispersed in water (A) and the ready to use pigment dispersion WAS (B).
Both formulae were tested at different polymer amounts expressed in total solids weight gain percentage. Process parameters for formula A and B are described in Table 2.

Table 1: coating formula A and B in percentages.

The mini-tablets (mT) were tested for uniformity of mass, friability and crushing strength and the surface characteristics were observed by Scanning Electron Microscopy (SEM ESEM-FEI Quanta 200). The coated mini-tablets (CmT) were characterized with regards to the actual drug content and in vitro drug release profiles (USP paddle method, 50 rpm, 900 ml pH 7.4 phosphate buffer at 37 °C). The analysis was performed spectrophotometrically (UV2, Unicam) at 271.8 nm.

In the first part of the study, four batches of mini-tablets containing different amounts of the drug (Table 3) were producted to select the formulation which had satisfactory mechanical properties to enable their coating in a pan, minimal weight variation and maximum drug content. All the mini-tablets produced had suitable technological properties for the coating (high crushing strength and very low friability) and complied with the test for uniformity of mass, according to European Pharmacopoeia. Batch mT4 was then selected for coating due to the highest drug content.
The second part of the study aimed to demonstrate the feasibility of mini-tablet coating in a solid wall pan and to test the possibility of replacing a standard coating preparation with a ready to use system.
Comparing the operative parameters used in coating involving formula A and B (Table 2) it is evident that the coating conditions were very similar, this demonstrates the interchangeability of the traditional formula containing the single components with the ready to use pigment dispersion.
The SEM photographs (Figure 1) of uncoated mT4 and coated m-T at different level show that a complete and uniform layer was achieved using both formulae even at low coating level. As shown in Figure 2, the uncoated mT released the 100% of active ingredients in less than 90 minutes.
A sustained release was ensured by both formulae and all polymer amounts, proportionally to the coating level. At the same coating level the dissolution profiles of both formulae were not significantly different, suggesting that the ready to use system is equivalent to the traditional one.

Table 3: composition and characteristics of mT. 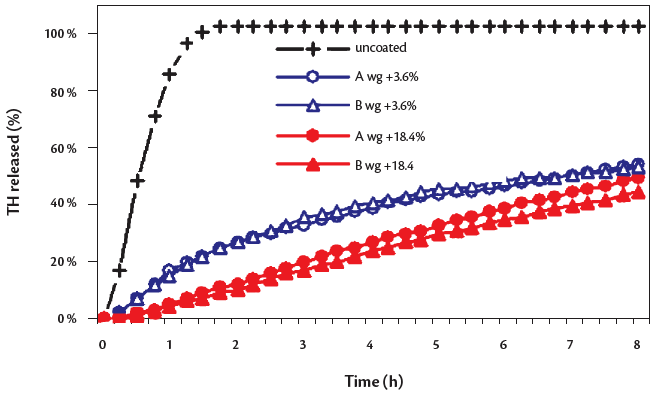 Figure 2: dissolution of uncoated and coated mT (formula A and B) at different total solids weight gain.

The results obtained showed that mini-tablets having a high amount of TH, low friability and high crushing strength were obtained by direct compression. A solid wall pan represents a suitable technique for mini-tablets coating and the use of a ready to mix pigment dispersion represents a suitable method
to shorten coating suspension preparation time. Therefore a sustained release multiple dosage form was successfully manufactured by using a tablet press and a solid wall pan.