Speed and teamwork to reconvert one of Catalent’s aseptic processing lines to face the global need to manufacture vaccines.

Publicly traded on the NYSE since 2014, Catalent is a global pharmaceutical company headquartered in Somerset, New Jersey, USA with operations around the world, a headcount of approximately 15,000 and a portfolio of over 7,000 products.  Located in Anagni, south east of Rome, the Italian facility produces and packages cardiovascular, anticancer, metabolic and anti-inflammatory medicines, as well as non-penicillin-based antibiotics, antivirals, injectable and biological analgesics.

Faced with a global need to manufacture vaccines to overcome the SARS-CoV-2 pandemic, the initial idea to reconvert an isolated aseptic processing line from powder processing to liquid processing capabilities came about at the start of 2020, when Catalent was taking over the facility from Bristol-Meyers Squibb.  General Manager of Catalent’s oral solid, sterile and biologic site in Anagni, Barbara Sambuco has been following the reconversion process and since the first commercial batch of the Covid vaccine was produced in April 2021.  What follows is a summary of her description of the reconversion gathered in a short interview.

Reconverting from powder to liquid

Originally supplied by IMA Life in 2017, the line was designed to process powder in an aseptic environment. The reconversion had to account for the new need to process liquids. IMA Life is specialised in Aseptic Processing and Freeze-Drying Solutions, and one of 3 divisions of the IMA Group serving the pharmaceutical sector.  Interest in reconverting the line was in part due to the fact it was in a separate building, making it an ideal choice for the production of biologics.  As soon as the pandemic became a major international issue, the reconversion project became a vital factor to enable continuity regarding the vaccine production objectives.

Aspects of the reconversion

Here is what the line was made up of before reconversion: 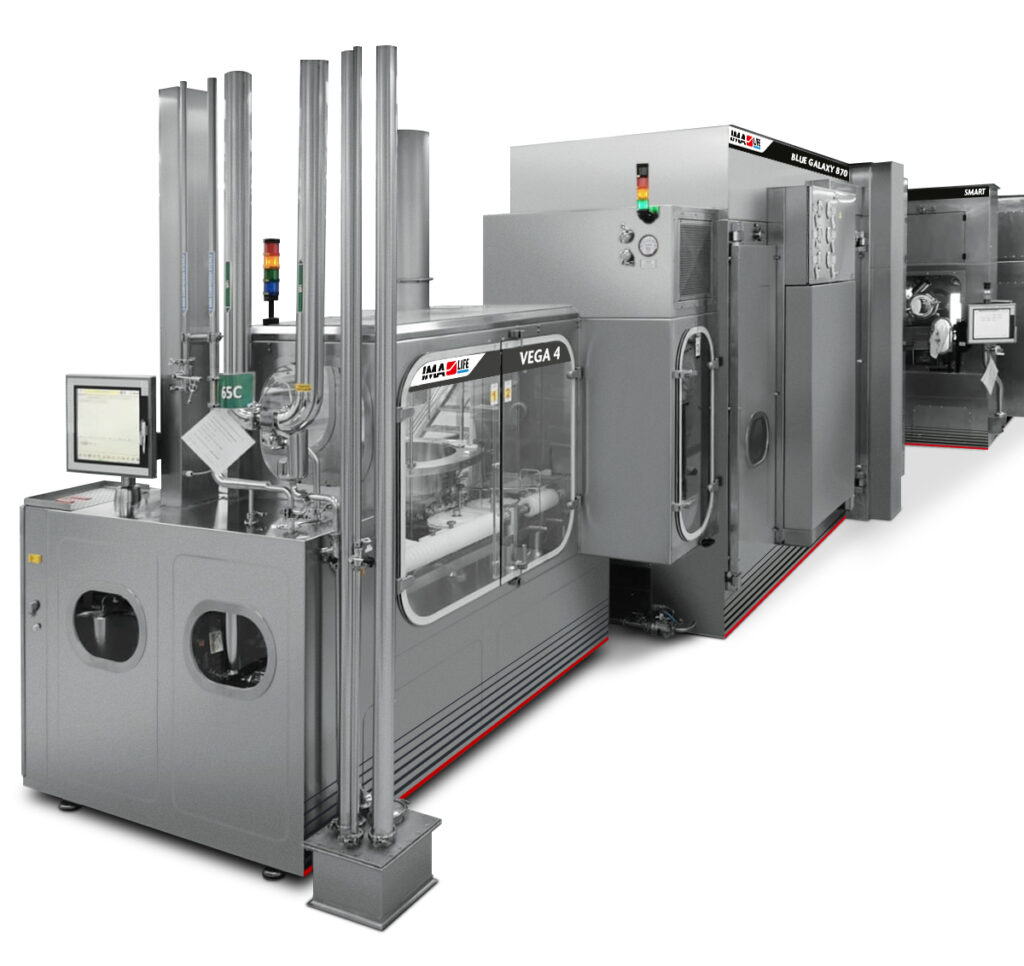 To adapt the line to aseptic liquids, the powder dosing system, featuring Auger Technology, was replaced by 2 peristaltic pumps.  This made it unnecessary to maintain the CIP/SIP skid which had been installed for powder, so this too was removed.  Moreover, as Catalent had opted to implement Single Use Systems (SUS), there was no need for a CIP/SIP solution as any elements coming into contact with the product would be fully disposable.  Clearly, if Catalent had chosen to use a volumetric dosing system, the CIP/SIP solution would have been maintained.

Further to the straightforward substitution of sections of the processing line, the company ran tests on the pressure cascade of the isolated area and conducted monitoring of temperature and humidity levels for production.

One aspect that was taken seriously by the entire team working towards the company’s objectives was the tight schedule. The faster the plant could become fully operational, the sooner the vaccines could be delivered to a global community in need.  Reconversion began in September 2020 and was completed in February 2021. This included mechanical changes made necessary to balance production, IOQ (Installation and Operational Qualification) activities and validation of the VHP cycle relating to the new sampling points.

Starting February 2021 the activities related to Process Performance Qualification were completed in one and a half months, including Engineering Batch and APS (Aseptic Process Simulation) tests, also known as Media Fill, which simulate production using a sterile nutrient media. This establishes the effectiveness of the controls in place for aseptic processing, and is required by GMP guidelines, specifically Manufacture of Sterile Medicinal Products – Annex 1.

Since July 2020, Catalent has been working with AIFA, Italy’s Medicines Agency, to enable a rolling review of documents regarding new production lines or technology transfers associated with vaccine production. This facilitates and smooths the Pre-Approval Inspection (PAI) procedures. Revamping of the existing line is part of this activity, so AIFA regularly receive updates. All these efforts have led to record-breaking schedules in which reports filed after inspection took less than two weeks to complete. Similarly, EMA implemented the rolling review procedures and approval arrived less than two weeks after closing the qualification batches.

By working as a focused team, together with the support provided by IMA Life, Catalent overcame all potential obstacles in respecting a tough timeframe, not only by analysing closely the impact of all the changes required in the reconversion, but also by rising to the aggressive timeline challenge. When asked about the company’s time-to-market goal, Barbara Sambuco commented: “We aimed to start with the first commercial batch in April 2021 and we made it. Production kicked off with a targeted speed in line with our expectations. The only way to optimise the reconversion was to involve IMA Life, leveraging their knowledge of aseptic processing and factors regarding the GMP guidelines and related requirements.” More than a simple reconversion of the Smart line from powder to liquid, this operation enabled us to ensure continuity in vaccine production and gave rise to a record-breaking feat. Barbara added: “If we had not had the chance to work with IMA as a team, this probably would not have been possible. From September 2020 to April 2021 all our energy was channelled into achieving an ambitious target. Thanks to IMA Life, we reached it!”

mail Contact us
Case Study, IMA Active
Famar and IMA Active: partners in excellence.
Established in 1949, Famar is a leading European provider of pharmaceutical manufacturing and development services. For 70 years the company has been a...
Case Study, IMA Active
IMA Active and SAVIO Industrial: together for process optimisation.
The SAVIO pharmaceutical group is a group of businesses with entirely Italian capital dating back to 1925. With its headquarters in Pomezia (RM) and a...
Case Study, IMA Active
A Q&A on coating in Continuous Manufacturing.
What is the biggest advantage of coating with Continuous Manufacturing versus as a batch process? Bertuzzi: Further to the time saving due to side operations,...
Case Study, IMA Active
Application of acrylic enteric coating directly on soft gelatine...
Introduction Literature about coating soft gelatine capsules with aqueous, polymeric solutions or dispersions is scarce, and this process poses a tough...
list View all updates
activate balloon:
main banner: